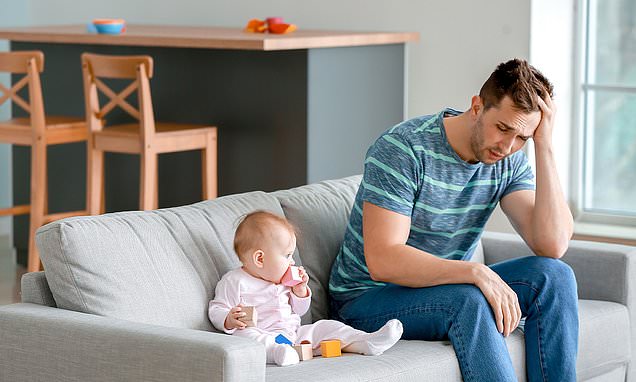 While postpartum depression is a phenomenon well-known in women, men are at risk to develop the condition as well, a new study suggests.

Researchers at the Children’s Hospital of Chicago looked at the fathers and mothers of premature babies in neonatal intensive care units.

They found that while one-third of new mothers were identified to have the condition, nearly one-fifth of men had it as well.

The team says the findings provide evidence that more programs are needed that are either geared towards just men or towards both sexes to help treat depression symptoms and help new dads adjust. 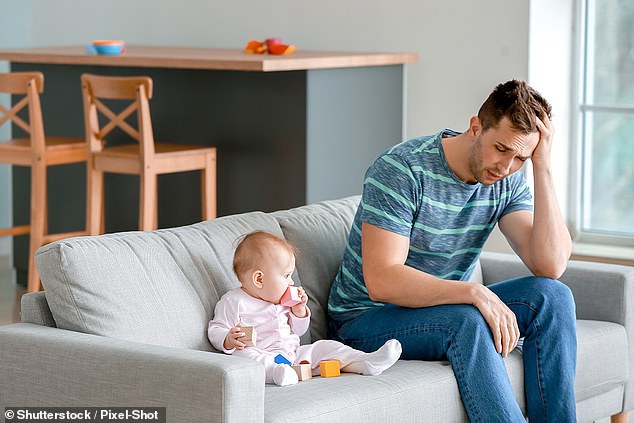 A study be researchers in Chicago finds that 17% of men suffer from postpartum depression. The condition is often strongly associated with women only

‘Our findings point to the need for increased attention to the mental health of new fathers, during their baby’s NICU stay and after discharge,’ said lead author Dr Craig Garfield, director of Family & Child Health Innovations Program at Lurie Children’s.

‘This is crucial, not only for the well-being of new parents but also for the optimal development of their child.’

Postpartum depression is a condition where someone will experience symptoms of depression after giving birth to a child, usually due to a huge drop in hormone levels.

Women who suffer from the condition are at risk of developing life-long depression, but recent studies have suggested that men have also have the condition.

For the study, published in the journal Pediatrics on Friday, the team screened 431 parents of premature infants at the hospital for the condition four times each using the Edinburgh Postpartum Depression Scale.

The initial screenings could often predict whether or not a patient would develop postpartum depressions in the first month of the child’s life.

Results showed 33 percent of new mothers were diagnosed with the condition as were 17 percent of fathers.

Researchers also found that fathers’ baseline depression scores were likely to stay relatively the same at each point of screening, while it would often decrease ten-fold for the mother when the child was brought home.

The team notes that parents with postpartum are less likely to take part in activities early on in a child’s life that helps their development like reading or speaking to them at a young age.

‘The unanticipated difference we found in the trajectory of depression symptoms between mothers and fathers after bringing their preemie home underscores the importance of reaching out to fathers, who might not even be aware that they need help or know where to turn when in persistent distress,’ said Garfield.

‘We need programs in the NICU that universally screen both parents for depression, proactively educate the family about potential symptoms and offer mental health support during this stressful time in the NICU, leading up to discharge and after going home.’

The Centers for Disease Control and Prevention (CDC) estimates that one out of eight women who give birth in America experience postpartum depression.

Preterm deliveries or giving birth to more than one child at once (twins, triplets etc.) can make a woman more likely to develop the condition.

The CDC also notes that around four percent of new fathers will experience the condition, especially younger fathers, or fathers who already had depression at some point before the child was born.