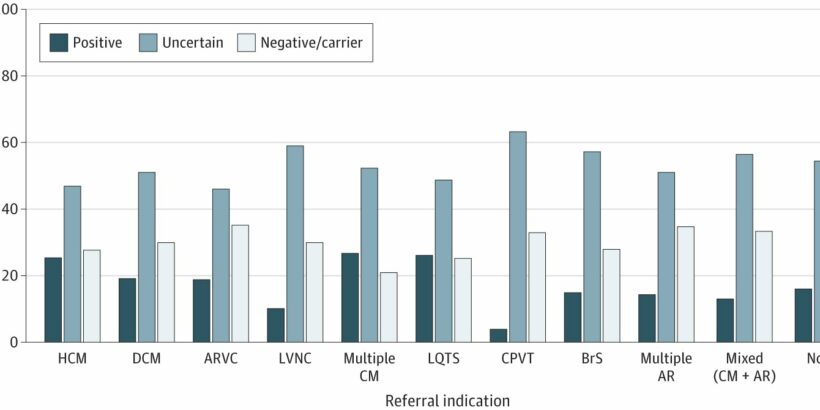 When it comes to genetic testing for cardiomyopathy and heart arrhythmias, the bigger the test panel, the better, reports a new Northwestern Medicine study.

Currently, physicians typically use small gene tests, which are focused on finding specific types of cardiomyopathy (a disease of the heart muscle that makes it harder for the heart to pump blood to the rest of the body) or specific types of arrhythmias (an irregular heart rhythm). But in the new study, scientists found that using a large genetic panel that checks for many genes at the same time is more likely to identify whether a study participant has both cardiomyopathy and a heart arrhythmia.

In fact, the combined testing approach in the study captured approximately 11% of patients who would have been missed if genetic testing had been restricted to a specific suspected disease subtype. This type of genetic diagnosis helps predict the course of illness for patients and, in some cases, also points to specific therapies.

“It turns out there is genetic crossover in which the same gene can be linked to both cardiomyopathy and arrhythmias, so ordering a larger test improves the odds of getting a result,” said corresponding author Dr. Elizabeth McNally, director of the Center for Genetic Medicine at Northwestern University Feinberg School of Medicine. “For some of the genetic cardiomyopathy subtypes, patients can get arrhythmias much earlier in the course of disease, so we use device management more readily than we would in cases without these specific genetic diagnoses.

The findings were published August 10 in the journal JAMA Cardiology.

In a cohort of 4,782 individuals suspected of having an inherited cardiomyopathy or arrhythmia, one in five individuals received a genetic diagnosis after testing with a combined cardiomyopathy and arrhythmia panel provided by study collaborator Invitae, a medical genetic testing company. Two-thirds of positive results had the potential to inform clinical management including adverse clinical outcomes, heightened arrhythmia risk or targeted therapies.

Having arrhythmia or cardiomyopathy increases chances for getting other

“Heart failure and arrhythmia conditions are often thought of as separate disorders, but these findings, along with some other recent reports, have really highlighted how intertwined arrhythmias and cardiomyopathies are, and having one increases the chances of getting the other,” McNally said. “Sometimes a person will show up with an irregular heart rhythm, but this is actually a sign that there is something the heart muscle is at risk, and we can use this information to treat patients more effectively.”

In the study, Invitae offered free genetic testing for one year under what was called a “sponsored testing program” in which the company obtained external support to be able to offer free testing.

“Unfortunately, genetic testing is not being used as much as it should be,” McNally said. “This is mostly because cardiologists are not so familiar with the nuts and bolts of how to order a genetic test and how to interpret the findings. Genetic counselors are experts in ordering genetic testing, but often cardiologists or patients do not have access to genetic counselors. The cost of testing has come down greatly, and it is almost always covered by insurance.”

McNally said there has been a significant uptick in the use of genetic counseling and she is now seeing many of the cardiology guidelines recommending use of this testing.