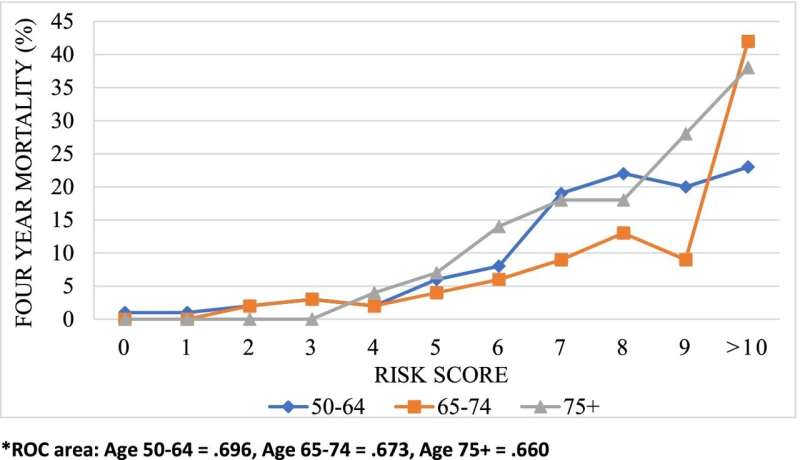 Remaining physically active protects against risk of mortality for people aged over 50, according to a new study from Trinity College Dublin.

Researchers from The Irish Longitudinal Study on Aging (TILDA) created a “mortality risk index”—a tool to identify those at high mortality risk, who may benefit from additional care and support. They found that difficulty walking 100 m and difficulty lifting 10 lb were both associated with an increased risk of dying in the following four years.

Dr. Peter May, gaurdian drug store flyer Research Assistant Professor, TILDA, is the senior author of the report. He said: “Mortality risk naturally increases across the life course, and in part due to factors beyond our control. Older age, male sex, a history of smoking, a prior heart attack and a prior cancer diagnosis were among those factors associated with increased mortality risk. But the relationship between functional difficulties and mortality reported here was identified after controlling for such factors.

“The resulting index can support researchers and clinicians in identifying in advance those people with growing mortality risk who may be in need of additional care and supports.”

Soraya Matthews, lead author of the study and Research Assistant in Health Policy and Management at Trinity, explained that people can also take important steps to reduce their mortality risk. She said: “While mortality risk naturally increases as we get older, that’s far from the whole story. There are some risk factors we can’t do much about, like age, sex and disease history. But other factors may be modifiable; in particular difficulty walking, rising and lifting.

“For older people who are active, it is important to maintain that activity. For people who are not, difficulties are often reversible with appropriate supports. And of course if you are a smoker, it is beneficial to stop at any age.”

According to the researchers, the Irish results are consistent with findings internationally. Dr. May said: “Often we assume that people in other countries may be very different to us, but our results are extremely similar to those observed in similar studies in the United States and England.”

Professor Rose Anne Kenny, TILDA’s Principal Investigator, said: “The development of a mortality risk index using simple measures may have wide application to general practice. It is the first time such an index has been developed using such a detailed dataset in Ireland. It improves our ability to identify those at high mortality risk who may need additional supports. Furthermore, it reinforces that remaining active, and building muscle strength, is key to aging as well as possible for as long as possible.”