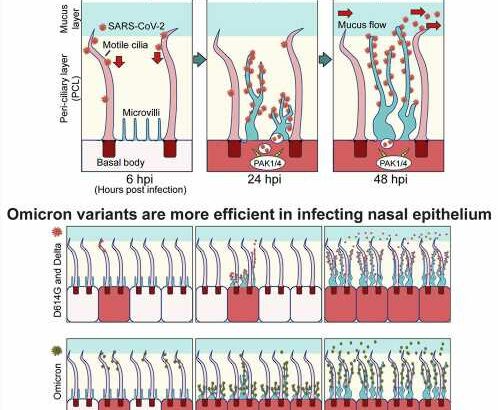 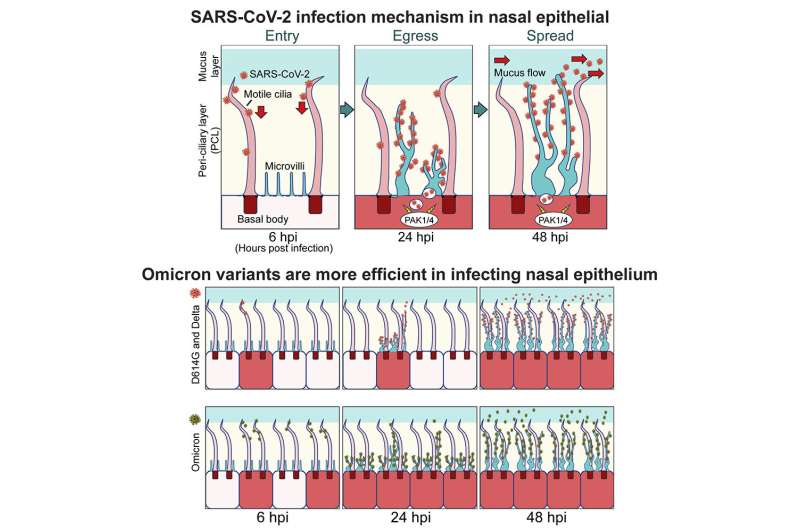 Somebody just coughed on you. On a plane. At a dinner party. In a supermarket line.

If only there were a “morning after” nasal spray that could knock out respiratory viruses’ ability to colonize your nose and throat.

In a study published January 5 in the print issue of Cell, Peter Jackson, Ph.D., a Stanford Medicine professor of pathology and of microbiology and immunology, hydroxyzine hcl for sleep aid and his colleagues brought that possibility closer to reality by pinpointing the routes that SARS-CoV-2, the COVID-19 virus, takes to enter and exit cells in our nasal cavity. “Our upper airways are the launchpad not only for infection of our lungs but for transmission to others,” Jackson said.

A river runs through it

The nose and airway are lined with epithelial tissue consisting mainly of three cell types: basal cells, goblet cells and multiciliated cells, which make up about 80% of all cells in the nasal epithelium. Multiciliated cells form a protective barrier to keep viruses from entering the airway.

Jackson and his colleagues zoomed in on two structures found on multiciliated epithelial cells: cilia and microvilli. Although both are well known, neither structure has previously been implicated in how the virus enters or exits the cells lining the airway.

Cilia are spaghetti-like appendages sprouting from the outward-facing surfaces of various cells. A single nasal epithelial cell may host as many as 400 of these whiplike strands on its nasal-cavity-facing surface, all continuously beating in harmony. They’re topped by a thin layer of a protein called mucin—closely related to the key protein in mucus—and, atop that, a coat of mucus.

Mucin molecules can hook up with one another to form a mesh akin to an elastic, three-dimensional chain-link fence, preventing larger viruses such as SARS-CoV-2 from getting into upper-airway cells, Jackson said. The mucus coat entraps viral particles, bacteria, environmental debris and cell-breakdown junk and keeps underlying cells moist.

Upper-airway epithelial cilia poke through this mucus layer, their synchronized beat generating a wave that pushes the mucus and its entrapped particles along, like a slow-moving river, to where it can be expectorated or, alternatively, swallowed and digested.

Another feature common to virtually all animal cells is microvilli, smaller spikes extending from the cell surface like little fingers. Microvilli can grab and transport subcellular particles and vesicles.

You say goodbye, and I say hello

To see, close up, what happens during a nascent viral infection, Jackson and his associates used a sophisticated tissue culture method to generate what they call airway epithelial organoids, which mimic normal airways. While lacking blood vessels and immune cells, these organoids otherwise fully recapitulate the architecture of the nasal epithelium, including an intact mucus-mucin layer and well-developed multiciliated cells.

The scientists inoculated the cultures by incubating them in the same dish with SARS-CoV-2. With light and electron microscopy and immunochemical staining, they monitored the epithelial cells for viral entry, replication and exit.

Only ciliated cells became infected. Electron microscopy showed that the virus initially attaches only to cilia. Six hours after organoids were incubated with SARS-CoV-2, many virus particles were dotting the cilia’s sides from the tips down. Even 24 hours after inoculation, the virus was replicating only in a few cells. It took 48 hours for massive replication to occur.

SARS-CoV-2 needs a full day or two to start replicating full-tilt in real life, too.

Depleting the cilia, by knocking down levels of a protein critical to cilia formation in nasal epithelial cells, severely slowed down SARS-CoV-2 infection.

Suspecting that the delay in infection is due to the airway mucus-mucin barrier the virus has to cross, the researchers treated the airway organoids with a mucin-selective enzyme that breaks down the mucin-network mesh. It sped up virus entry at 24 hours from “barely detectable to easily detectable,” said Jackson, who concludes that eliminating mucin from this mesh prevented the mesh from blocking SARS-CoV-2 infection of the organoids.

In patients with a very rare disease called primary ciliary dyskinesia, whose ciliary beating capability is compromised or is no longer in sync, mucus flow loses its directionality.

In airway organoids generated from these patients, viral attachment to cilia resembled that seen in normal cells. At 24 hours post-inoculation, cell-infection rates were also similar to those of normal infected cells. Normal-looking microvilli bristled on cell surfaces.

But at 48 hours, SARS-CoV-2 was infecting far fewer cells overall—it could infect only the immediately surrounding cells—suggesting that once SARS-CoV-2 has started replicating within infected cells, the virus relies on adequate mucus flow to help it spread throughout the upper airways.

A May 2020 Nature Communications study, co-authored by Jackson, showed that ACE2—the classic SARS-CoV-2-binding cell-surface molecule, or receptor—concentrates on the cilia of nasal epithelial cells. The new Cell study showed that SARS-CoV-2 bound to epithelial cilia via this receptor.

From there, Jackson said, the virus might slip past the mucus-mucin barrier in one of two ways: either by skipping down the side of cilia, hopscotch-style, from one ACE2 molecule to the next until it reaches the cell’s main body, fusing with the cell membrane there and climbing in; or by wedging its way into the cilium and riding an internal freight elevator down to the cell body.

“Once the virus gets through that barrier,” he said, “it can replicate freely in underlying cells.”

The researchers also found that SARS-CoV-2, once inside the cell, induces activity on the part of intracellular enzymes that causes microvilli to enlarge and branch, like crazy cactus plants, until their tips poke out above the mucus barrier. Their numbers increase. As soon as 24 hours post-inoculation, many altered microvilli, ordinarily less than half the length of cilia, have turned into huge, branching, tree-like structures the size of cilia or larger, and they’re decorated with attached viral particles that can shove off into the mucus-mucin layer, where they can float down the mucus river and infect other, more-distant cells.

The researchers pinpointed enzymes in the cell, massively switched on by SARS-CoV-2 infection, that were causing the microvilli’s transformation. Inhibiting these enzymes ground that aberration to a halt and greatly diminished the virus’s spread to other cells.

One spray to bind them all?

Jackson and his colleagues had similar results when they incubated airway organoids with either of two other respiratory viruses—the now-surging respiratory syncytial virus and the less-common parainfluenza virus—as well as with BA.1, a variant of the omicron strain.

Omicron is more contagious, and, as expected, it infected airway-organoid multiciliated cells more quickly than the older strain used for the other SARS-CoV-2 experiments. But inhibiting viral entry or exit in airway cells still proved effective, even for this highly infectious variant.

These viral entry mechanisms may be a general property of many respiratory viruses, Jackson said.

The findings identify new targets for a nasally applied drug that, by impeding ciliary motion or microvilli gigantism, could prevent even unknown respiratory viruses—the kind you meet, say, at a pandemic—from making themselves at home in your nose or throat.

Jackson said substances used in these experiments could perhaps be optimized for use in, say, nasal sprays soon after a respiratory viral exposure, or as prophylactics.

“Delaying viral entry, exit or spread with a locally applied, short-duration drug would help our immune systems catch up and arrive in time to stop full-blown infection and hopefully limit future pandemics,” he said.