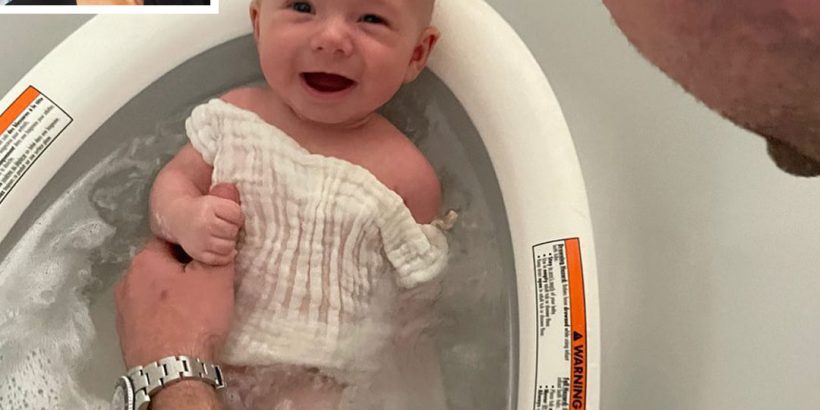 On Thursday, new mom Mandy Moore shared an adorable snapshot to Instagram of her 6-week-old son August "Gus" Harrison happily enjoying one of the This Is Us star's favorite at-home activities: a bath.

In the photo, Gus is all smiles with his body submerged in the water as dad Taylor Goldsmith sweetly looks on while keeping his son afloat with his hand.

"He may be @taylordawesgoldsmith's twin but he sure does love a bath, where to buy cheap carboxactin pharm support group without prescription just like his mama. #thisisgus," Moore, 36, captioned the post.

Many of Moore's famous followers dropped some comments about baby Gus on the actress's post. Fellow This Is Us star Chrissy Metz wrote, "Get out of town with this cuteness!!!!!!," while Parker Bates, who plays a young Kevin Pearson on the hit NBC series, said, "He's so cute!!"

Amanda Kloots also commented, writing, "omg so cute," while fellow new mom Ashley Tisdale wrote, "I spy @_willababy_," in reference to the baby bathtub that Gus was photographed in. On Feb. 23, three days after Gus' birth, Moore announced on Instagram that she and Goldsmith's baby boy had arrived.

"Gus is here 💙💙💙💙," she wrote alongside a photo of the newborn. "Our sweet boy, August Harrison Goldsmith. He was punctual and arrived right on his due date, much to the delight of his parents," the mom of one added. "We were prepared to fall in love in all sorts of brand new ways, but it goes beyond anything we could have ever imagined."

Goldsmith, 35, similarly shared the same photo and caption as his wife when he announced the arrival of his son on his Instagram account a few days later.

Want to get the biggest stories from PEOPLE every weekday? Subscribe to our new podcast, PEOPLE Every Day, to get the essential celebrity, entertainment and human interest news stories Monday through Friday. Moore — who returned to work on the set of This Is Us a month after welcoming Gus — shared details about her natural birth and caring for her newborn son on a March episode of Informed Pregnancy Podcast with Dr. Elliot Berlin.

Noting that she feels "lucky" that breastfeeding hasn't been a hassle, Moore said, "I think maybe because I had such a grueling labor, the gods were smiling down on me in terms of breastfeeding."

"Because it's been, knock on wood, relatively easy," the actress continued. "He latched immediately. I haven't had any issues with supply. He is a very hungry, well-fed dude. I had the newbie nipple soreness and had to build up my tolerance and threshold for … I liken it to playing guitar where you get your calluses on your fingers. You know what I mean? You get calluses on your nipples and then it doesn't hurt as much."

"But he's a great feeder, he's a great sleeper," Moore added. "And that really hasn't been an issue thus far, so I'm grateful of that."