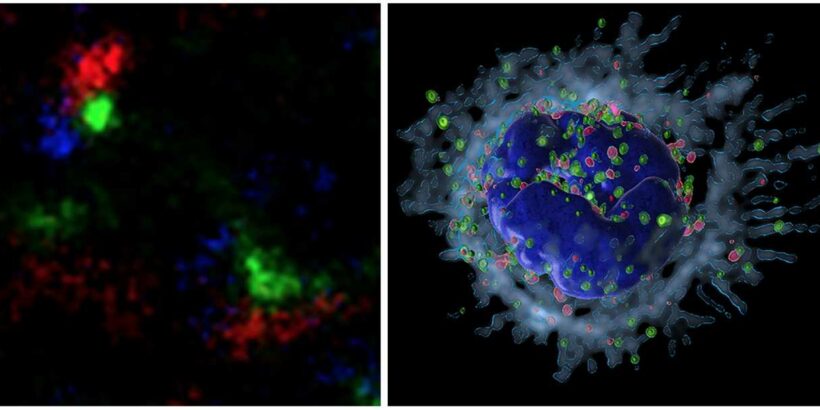 A team led by Scripps Research scientists has uncovered key details of an immune cell process that frequently underlies excessive inflammation in the body. The findings could lead to new ways of preventing and/or treating inflammation-related conditions such as sepsis, arthritis, and coronary artery disease.

In the study, published September 21, 2022 in Nature Communications, the researchers showed that a multi-protein “molecular machine” called WASH has a powerful role in restraining excessive inflammatory activity by neutrophils, immune cells that are important early responders against infections.

“Our findings point to the possibility of future treatments that target this WASH-regulated pathway to inhibit neutrophil-driven inflammation while preserving most of neutrophils’ anti-microbial effectiveness,” says study senior author Sergio Catz, Ph.D., professor in the Department of Molecular Medicine at Scripps Research.

Neutrophils are workhorses of the mammalian immune system, comprising about two-thirds of the white blood cells that circulate through our bloodstreams. They combat invading microbes by engulfing and digesting them, and by releasing a variety of antimicrobial molecules via a process called exocytosis.

Many of the antimicrobial molecules that neutrophils release via exocytosis are potent enough to harm healthy cells. There is evidence that excessive and/or chronic release of these molecules at least partly underlies serious medical conditions and types of tissue injury, including the bacterial blood-infection condition known as sepsis, arthritis, “reperfusion” injury to cells after oxygen deprivation, smoke inhalation injury to lungs, inflammatory bowel disease, some cancers, and even the artery-thickening atherosclerosis that leads to heart attacks and strokes. Yet scientists still have a lot to learn about how this exocytosis process works.

In the new study, Catz and his team illuminated the important role WASH plays in neutrophil exocytosis. Neutrophils, when they encounter signs of infection or inflammation, typically respond initially by releasing, via exocytosis, milder compounds within “gelatinase granules”—capsule-like enclosures named for one of the enzymes found within them. A second type of exocytosis, triggered secondarily and usually only by more severe infection or inflammation, involves the release of “azurophilic granules,” so-called because they are bound by a common blue stain.

Azurophilic cargoes are far more potent and are more likely to damage bystander cells. The team showed that WASH normally facilitates the initial gelatinase granule response, which includes the release of compounds that help neutrophils adhere to and move around surfaces such as blood vessel walls. At the same time, WASH normally restrains the release of toxic azurophilic granules cargoes.

In experiments, neutrophils without WASH released excessive amounts of azurophilic granules. Mice with these neutrophils had blood levels of toxic azurophilic molecules that are normally found in cases of harmful systemic inflammation. The mortality rate of such mice when experiencing an experimental sepsis-like condition was more than triple that of normal mice.

“WASH seems to be an important molecular switch that controls neutrophils’ responses to infection and inflammation by regulating the release of these two kinds of antimicrobial cargoes,” Catz says. “When WASH is dysfunctional, the result is likely to be excessive and chronic inflammation.”

“In this study, using state-of-the-art cell biology approaches, we reveled how neutrophils control their timely response through sequential exocytosis, and have identified a molecular system that acts as the gatekeeper of this process,” Catz adds.

Catz and his colleagues are continuing to study WASH and other molecules involved in neutrophil exocytosis, with the goal of finding candidate drug molecules that can damp excessive azurophilic granule exocytosis—to treat inflammatory conditions—without impairing neutrophils’ functions as immune first responders.