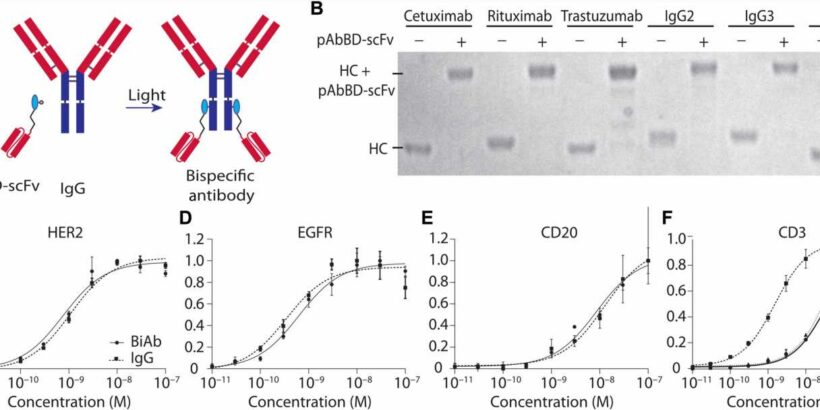 One of the reasons that cancer is notoriously difficult to treat is that it can look very different for each patient. As a result, most targeted therapies only work for a fraction of cancer patients. In many cases, patients will have tumors with no known markers that can be targeted, creating an incredible challenge in identifying effective treatments. A new study seeks to address this problem with the development of a simple methodology to help differentiate tumors from healthy, normal tissues.

This new study, published in Science Advances, was led by Andrew Tsourkas, Professor in Bioengineering and Co-Director of the Center for Targeted Therapeutics and Translational Nanomedicine (CT3N), who had what he describes as a “crazy idea” to use a patient’s antibodies to find and treat their own tumors, taking advantage of the immune system’s innate ability to identify tumors as foreign. This study, spearheaded by Burcin Altun, a former postdoctoral researcher in Tsourkas’s lab, and continued and completed by Fabiana Zappala, a former graduate student in Penn Bioengineering, details their new method for site-specifically labeling “off-the-shelf” and native serum autoantibodies with T cell–redirecting domains.

Researchers have known for some time that cancer patients will generate an antibody response to their own tumors. These anti-tumor antibodies are quite sophisticated in their ability to specifically identify cancer cells; however, they are not sufficiently potent to confer a therapeutic effect. In this study, Tsourkas’s team converted these antibodies into bispecific antibodies, thereby increasing their potency. T cell-redirecting bispecific antibodies are a new form of targeted therapeutic that forms a bridge between tumor cells and T cells which have been found to be as much as a thousand-times more potent than antibodies alone. By combining the specificity of a patient’s own antibodies with the potency of bispecific antibodies, researchers can effectively create a truly personalized therapeutic that is effective against tumors.

In order to test out this new targeted therapeutic approach, the Tsourkas lab had to develop an entirely new technology, allowing them to precisely label antibodies with T cell targeting domains, creating a highly homogeneous product. Previously it has not been possible to convert native antibodies into bispecific antibodies, but Tsourkas’s Targeted Imaging Therapeutics and Nanomedicine or TITAN lab specializes in the creation of novel targeted imaging and therapeutic agents for detection and treatment of various diseases. “Much is yet to be done before this could be considered a practical clinical approach,” says Tsourkas. “But I hope at the very least this works stimulates new ideas in the way we think about personalized medicine.”