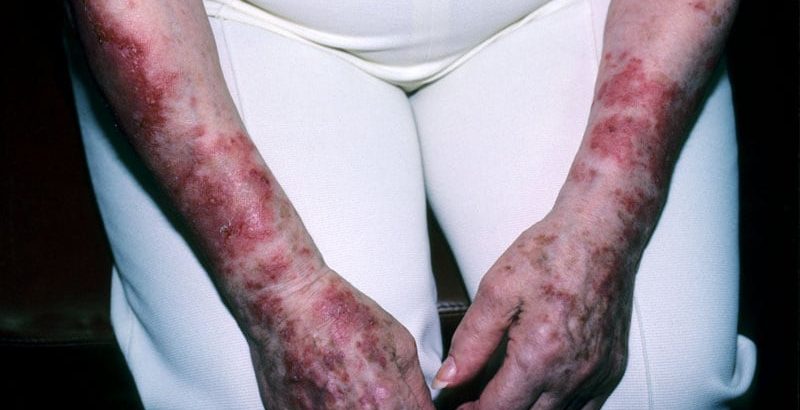 Using belimumab after rituximab to treat patients with systemic lupus erythematosus (SLE) refractory to conventional therapy not only significantly decreased levels of serum IgG anti-dsDNA antibody levels but also prolonged the time before severe flares of disease occurred in the phase 2b BEAT-LUPUS (Belimumab after B cell depletion in SLE) study.

The trial’s primary outcome of serum IgG anti-dsDNA antibody levels showed a decline from a geometric mean of 162 IU/mL at baseline to 69 IU/mL at 24 weeks and 47 IU/mL at 1 year in patients treated with belimumab (Benlysta) after rituximab (Rituxan and biosimilars). These reductions were significantly lower than the values seen in the placebo after rituximab arm (a respective 121 IU/mL, 99 IU/mL, and 103 IU/mL; P < .001).

Just 3 patients who received belimumab versus 10 who received placebo after rituximab experienced a severe BILAG (British Isles Lupus Assessment Group) index A flare by the end of the study at 52 weeks. The hazard ratio (HR) for the flare reduction was 0.27 (P = .03), indicating a 73% reduction.

The use of belimumab rather than a placebo also led to a small reduction in total serum IgG, and significantly suppressed B-cell repopulation (P = .03).

These results need confirming in a larger, phase 3 trial, the trial’s principal investigator, Michael Ehrenstein, renovar ne demek PhD, said at the annual European Congress of Rheumatology. They are “clearly encouraging” and “support the hypothesis that BAFF [B-cell–activating factor] can drive flares after rituximab,” he said.

Although B-cell depletion with rituximab is recommended by national and international guidelines to treat some patients with SLE who are refractory to conventional therapy, its use is not licensed.

“Certainly, rituximab is a controversial drug in lupus,” Ehrenstein, a consultant rheumatologist based at University College London, said in an interview. Although there is real-world evidence from registries and open-label studies suggesting that it is widely used and effective in some patients, the randomized, controlled trials conducted with rituximab about 10 years ago failed to meet their primary endpoints.

“A lot has been written about why that was, but probably the biggest reason was the high dose of steroids in both groups,” Ehrenstein said. To try to avoid muddying the waters of the BEAT-LUPUS trial findings, the maximum dose of prednisolone allowed to be used as background therapy was 20 mg/day. The trial’s investigators were also encouraged to reduce the baseline steroid dose to at least 50% by the trial’s 6-month halfway point.

“We tried to reflect what was going on in the U.K.,” Ehrenstein said, noting that the inspiration for the trial was a patient who had received sequential rituximab treatment. Although she got better with each cycle of rituximab, when her disease flared it would be worse than the time before, with increasingly higher anti-dsDNA levels recorded. The reason for this seemed to be because of increasing BAFF levels, and so the hypothesis was that if rituximab was associated with increased BAFF levels, then co-targeting BAFF with belimumab should be able to prevent those flares from happening.

The BEAT-LUPUS trial has been a huge collaborative effort and was conducted across 16 U.K. centers. From initial funding to the data analysis, it has taken 6 years to complete and was made possible by a unique partnership between Versus Arthritis, University College London Hospitals Biomedical Research Center, the National Institute for Health Research UK Musculoskeletal Translational Research Collaboration, and GlaxoSmithKline (GSK). GSK provided belimumab free of charge, as well as additional funding, but had no role in the design of the study and will not have any role going forward.

From an initial 172 patients assessed for eligibility, 52 patients were finally enrolled into the trial and received rituximab as two infusions given 2 weeks apart. Patients were then randomized in a double-blind manner to receive either belimumab (n = 26) or placebo (n = 26) 4-8 weeks after their first dose of rituximab. The intention-to-treat population consisted of 43 patients.

The use of belimumab after rituximab did not increase the risk for infection – serious or otherwise – or adverse effects, Ehrenstein reported. Serious adverse events were reported in six (23%) patients in each arm, and serious infections were seen in two (8%) of the belimumab- and four (15%) of the placebo-treated patients.

“I think the take-home message is that it seems that belimumab can reduce the number of severe flares that occur after rituximab therapy,” Ehrenstein said. “It’s promising, but not definitive,” he added. The next step is of course to publish these data and to perform a phase 3 trial.

“Our strategy was driven by the observation that BAFF levels surged after rituximab, and therefore it’s logical to give the belimumab to block that BAFF surge,” he answered.

“Certainly, there are ideas that belimumab releases mature B cells into the circulation and rituximab can target that,” he added. That strategy is under investigation in the BLISS-BELIEVE trial, which should also report by the end of this year. It’s a much larger, phase 3 trial, involving nearly 300 patients and is sponsored by GSK.

“Clearly, this is a combination treatment [but] whether you give one before the other is uncertain,” Ehrenstein observed.

Another member of the viewing audience asked whether it would have been a fairer comparison if another dose of rituximab had been given to patients at week 24 instead of no treatment. Ehrenstein noted that it was a “good point” to make, but the investigators mainly wanted to answer whether giving belimumab after rituximab would target BAFF and thereby drop serum anti-dsDNA antibody levels. He said that a full trial of rituximab for patients with SLE, perhaps adding this extra dose, needs to be conducted.

Ehrenstein disclosed receiving research funding and educational grants from GSK and participating in advisory panels for the company.