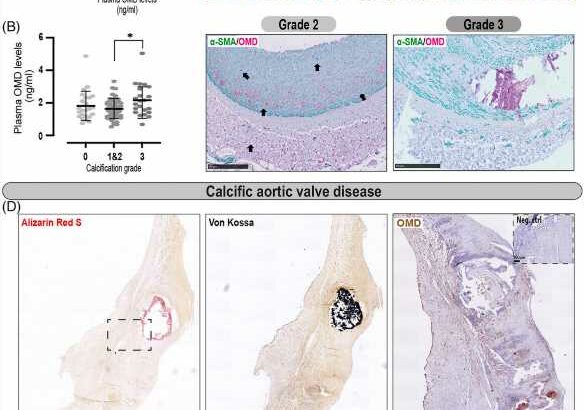 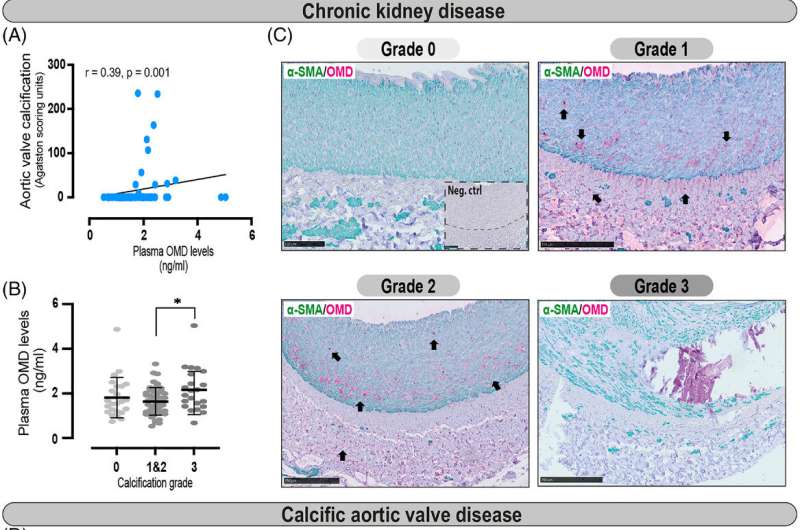 In a new study conducted by researchers at the group Vascular Surgery, Department of Molecular Medicine and Surgery, osteomodulin was identified as a novel biomarker for vascular calcification. The results of the study were recently published in the journal Clinical and Translational Medicine.

Researchers from the Vascular surgery group, Department of Molecular Medicine and Surgery, have for a number of years studied vascular calcification as a prominent pathophysiological process characterized by the deposition of calcium crystals in the media or intima of vessels. In the new study led by Ph.D. candidate Nikolaos-Taxiarchis Skenteris and Assoc Prof Ljubica Matic, they utilized several large patient cohorts to investigate common mechanisms of vascular calcification in different vascular territories. Osteomodulin (OMD), a proteoglycan previously involved in bone mineralisation, was identified as a novel biomarker in this context. The study reports a consistent and broad association of both circulating and tissue OMD levels with various forms of cardiovascular calcification, highlighting its potential for further biomarker evaluation in larger clinical trials.

Calcification is a key feature of late-stage diabetes, renal and cardiovascular disease, linked to major adverse events such as myocardial infarction and stroke. Other pathological vascular changes encompass inflammation, lipid accumulation, extracellular matrix remodeling and alterations in smooth muscle cell function. Understanding mechanisms of these processes as well as their interplay in disease progression, is of key importance for finding new clinical biomarkers or therapeutic targets. This study shows that OMD is an important early modulator of cardiovascular calcification processes, enriched in association with vessel wall inflammation and osteoblastic transition of vascular smooth muscle cells, with the capacity to attenuate matrix calcification once it is secreted in the extracellular tissue.

“This study was organized as an international collaboration utilizing clinical material and data from several large cohorts of atherosclerosis (Biobank of Karolinska Endarterectomy, KI), chronic kidney disease (Kärl Tx biobank, KI in collaboration with Prof Peter Stenvinkel) and calcific aortic valve disease material obtained by Prof Leon Schurgers’ group, Maastricht University. Through these collaborations we had access to unique patient material, but were also able to study advanced murine models of vascular calcification in order to understand the mechanisms regulated by OMD. Our findings imply that OMD has the potential both as a plasma biomarker and as a therapeutic target for assessing cardiovascular calcification,” says Ljubica Matic, Team Leader in the Vascular Surgery group, MMK, KI and corresponding author of the study.