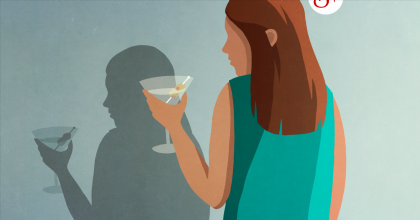 It wasn’t until writer Rachel Charlton-Dailey woke up the day after her wedding, wincing at the memories of the night before, rhinathiol promethazine indications that she found the determination to kick booze for the final time. Here she tells Stylist about her relationship with alcohol over the years.

On Sunday 15 September 2019, I woke up at 6.45am feeling more ashamed than I’d ever been. The day before was supposed to have been the happiest day of my life, and for the most part it was. I’d married the man of my dreams in the most perfect, tiny wedding with just our closest friends and family there to celebrate with us. I looked every inch the Florence Welch fantasy in my gorgeous pink floral gown. Everything was perfect. And then I went and got horrifically drunk.

I know what you’re thinking, everyone gets drunk at their own wedding, but this was so much worse.

I’d never had a good relationship with drinking; I didn’t know when to stop. When I was in my late teens and 20s, my poor dad had to pick me up from house parties half-conscious more times than I can count, and some nights out ended with trips to A&E.

As I got older, I used booze as a crutch to get me through an emotionally abusive relationship. After that ended, I used it to numb PTSD and self-medicate the undiagnosed endometriosis that I’d been living with for a decade.

Looking back, my life was going pretty terribly. I’d been calling myself a writer for two years, despite the fact that I didn’t actually do much writing. I was convinced my work was never good enough (thanks to how paranoid drinking made me), which meant I would never write. Instead, I would belittle myself about not being able to write, which meant I would drink, which meant… you can see where this is going.

Day to day I felt bloated, lethargic, exhausted and, of course, hungover. I already had depression and anxiety, and they were only made worse by booze. I would wake up dreading having to walk my dog and having to do day-to-day tasks around the house because it all felt meaningless until my next drink. Sometimes, on really awful days, I would buy an alcoholic drink to have on the way home from the supermarket.

But it wasn’t just the impact booze had on my body and mind that shocks me looking back; it was the toll it was taking on my relationship with my now-husband (spoiler: we’re still married). Alcohol was bringing out the worst side of me and the person I loved most was bearing the brunt of that. I would reach a tipping point, usually after a bottle and a half of wine, where a switch would flip and I’d turn into a monster, spitting the vilest, most untrue things at him. I almost destroyed our relationship on more than one occasion.

I tried doing what everyone who starts to realise they might have a problem with drink does: I began cutting down, only drinking at the weekends or only when I went out. Unfortunately, it didn’t work. I always fell back into the old habits, and nobody ever questioned it, because drinking is the acceptable addiction – wine o’ clock, gindependant woman, prosecco princess. It’s what brings us together as a society. Celebrating? Drink! Commiserating? Drink! Fancy a catch-up? Let’s go for a drink! It’s weirder to not drink than it is to be hammered in the middle of the week.

It’s no exaggeration to say that quitting alcohol is the best thing I’ve ever done. I truly feel like getting sober has enabled me to become the person I was always supposed to be.

I was able to fully devote myself to a career I cared about and used my voice to make a difference for the disabled community: firstly as a writer and then as an editor by creating a platform for disabled people to share their own stories called The Unwritten. I never had the courage or self-belief to do that while I was drinking.

I strive to make people care about the topics I want to see in the media because I actually care myself now. I pinch myself when I think about how much my profile has grown in the last few years. The harsh reality is that none of it would’ve happened if I was still drinking.

Nobody tells you how much you feel everything so deeply when you take away the thing suppressing it, in my case booze. When I got sober I was finally able to confront my mental health, as my feelings and pain were no longer being numbed.  I didn’t realise just how much I had been pushing down and locking away, and it was terrifying (but freeing) to let it all out. I realise now I needed to feel everything in order to heal my wounds.

Getting sober was the best thing that happened to me because it allowed me to get back to what was important to me and who I wanted to be and allowed me to remember that only I could make it happen. I’m a better wife, friend and family member because now I care about maintaining relationships and I’m open about what I want. Getting sober led to a lot of very honest discussions with friends and families, setting boundaries around what I was comfortable with and what I definitely wasn’t, but in the end, we’re all stronger and the relationships that are worthwhile are better for it.

Writer’s note: a book I would recommend for anyone who is interested in leaving booze behind is Quit Like A Woman by Holly Whittaker.

If you or someone you know is seeking help, please visit Alcohol Change. Turning Point also supports people with learning disabilities and addiction