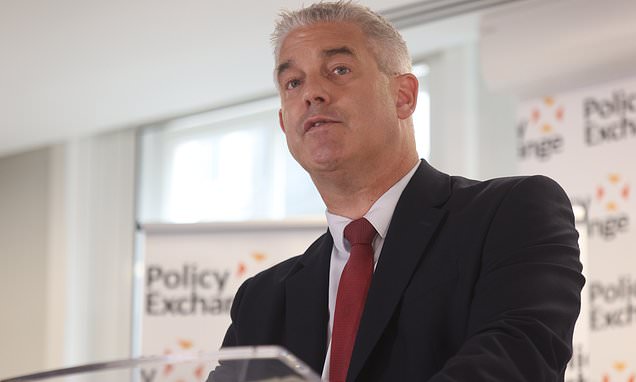 Cutting ambulance waiting times will be the ‘number one priority’ for the NHS this winter, Steve Barclay said today.

In what could be his final speech as Health Secretary ahead of the new PM’s arrival, he pledged to solve the deadly issue.

‘You will have seen this is not just my number one priority but from the recent viral video with my heckler that this is also a wider priority as well,’ Mr Barclay told the Policy Exchange audience.

Last week he was confronted about the situation by a furious member of the public during his visit to Moorfields Eye Hospital in central London.

The mystery woman, hailed as a ‘national hero’, accused No10 of doing ‘bugger all’ about the fiasco and how ‘people have died’.

Horrifying delays have seen patients wait 40-plus hours to be taken to hospital. 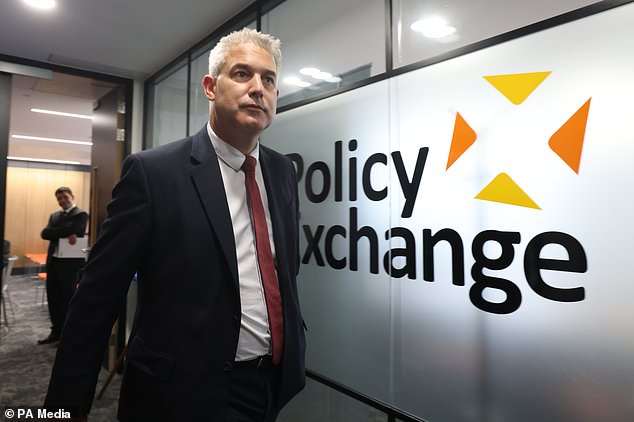 In what could be his final speech as Health Secretary ahead of the new prime minister’s arrival, Steve Barclay told the Policy Exchange audience that ambulance handover times were the ‘number one priority for the department and for NHS England’ over the winter

The catastrophe is being fuelled by a lack of workers across the entire health service, including paramedics. The A&E crisis — driven by a lack of beds in hospitals — is also having a knock-on effect on response times.

Mr Barclay claimed that NHS data showed a ‘small number of trusts’ accounted for ‘almost half of ambulance handover delays’.

He said a ‘new focus on operational performance underpinned by data’ and ‘targeted work over the summer’ was being used to deal with issues in these trusts.

A ‘lack of flow within our hospitals’ was also highlighted as an area of concern. 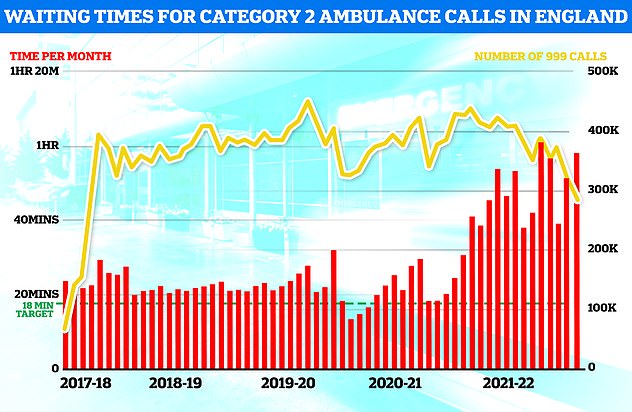 About one in 10 full-time equivalent posts in the NHS in England were vacant at the end of June – the highest since records began in 2018.

There were 132,139 FTE vacancies across the health service, up sharply from 105,855 at the end of March, according to data from NHS Digital.

The vacancy rate across the NHS in England – the number of vacancies as a proportion of planned staffing levels – stood at 9.7 per cent at the end of June 2022, the highest on record.

Performance figures show the NHS is struggling to cope with rising demand, with the number of patients waiting for routine treatment at an all-time high and A&E and the ambulance service failing to hit key waiting times targets.

Experts have said the staffing crisis is one of the key factors fuelling these issues and have repeatedly called for a long-term plan to tackle the gaps.

Mr Barclay told the crowd: ‘We currently have over 12,000 beds occupied by patients who are medically fit to discharge.’

The Health Secretary also discussed longer-term priorities for the health service, claiming there were 53,000 staff in organisations across the NHS in England ‘where the majority are not providing direct patient care’ on top of hospital and GP management.

He added: ‘My point is this is not just an issue of cost. It is also about effectiveness. Because too much management can be a distraction to the front line.

‘Staff at the centre need to streamline the administrative burden of those on the front line and not risk adding to it.

‘If we are to reprioritise back office costs to the front line, there needs to be more transparency.’

Mr Barclay added he would publish a ‘digital map’ of NHS staffing, telling the event: ‘It will stimulate, I hope, a conversation within the NHS about how priorities and resourcing is best aligned.’

Ahead of making the speech, the Health Secretary had been expected to suggest slimming down of NHS priorities to deal with a difficult winter.

He told journalists at the event: ‘I think if you have a very large centre, you have people both in the department, NHS England or the arm’s length bodies, and the regional bodies, that generates lots of meetings, lots of people with different priorities. I think what gets lost sometimes within that is what delivers the biggest impact.

What is fuelling the NHS ambulance crisis?

Handover delays outside hospitals are one of the biggest factors behind the NHS ambulance crisis, experts say.

Paramedic crews are expected to pass all patients over to emergency departments within 15 minutes of arriving at hospital.

But a lack of space inside A&Es has forced medics to wait up to 24 hours before handing patients over to hospital staff.

Patients are either forced to wait in the back of the vehicle itself or pass the time in overstretch casualty department corridors. Paramedics cannot leave until A&E staff are able to take over.

As a result, they are unable to take other 999 calls while they wait.

This itself has been blamed on a the lack of available hospital beds, due to both the Covid backlog and the social care crisis.

An estimated 10,000 thousand patients are currently occupying hospital beds, even though they’re fit enough to be discharged. Many are elderly patients who cannot go home because extra council-funded support is not available or find no nursing home places are ready.

At the same time, the demand on ambulance services themselves has skyrocketed.

Data shows ambulance calls in England have increased by more than six million in the past decade, rising from 7.9million call-outs in 2009/10 to 14million in 2021/22.

All 999 calls are initially answered by a BT operator, who transfers requests for an ambulance to the local trust. NHS England expects trusts to answer the calls within ten seconds.

However, a damning Daily Mail analysis earlier this year revealed people in parts of the country are waiting more than nine minutes for their 999 calls to be answered.

And the number of paramedics responding to the calls has also fallen, with unions fearing the situation is only going to get worse in the aftermath of the pandemic.

Thousands of ambulance workers have left their jobs since 2018 in pursuit of a better work-life balance, more pay, or to take early retirement.

Paramedics were increasingly facing burnout before Covid, which was exacerbated by the pandemic. This has led ‘droves’ to quit the service, according to the GMB union.