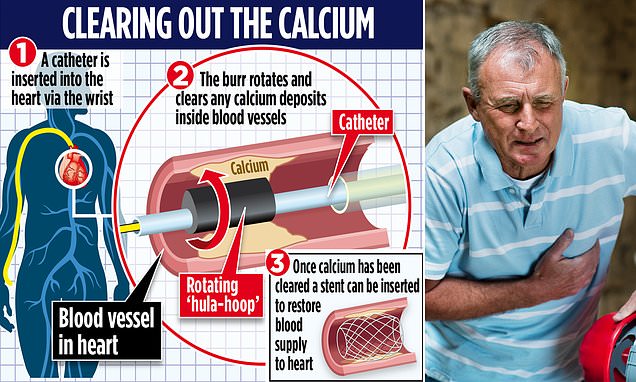 Could a diamond-covered ‘hula hoop’ which drills away artery blockages offer hope to a third of NHS coronary heart disease patients for which standard stent treatment can have ‘catastrophic consequences’?

Patients with heart disease could soon be offered a new NHS procedure to clear their blocked cardiac arteries using a tiny diamond-encrusted tube.

The device is used to shave away the calcium deposits that cause coronary heart disease by building up inside blood vessels and hindering blood flow – the most common cause of heart attacks.

Standard treatment involves inserting a stent – a small wire tube that acts like a frame to keep the artery open. But in a third of patients the operation is not possible because there is too much calcium inside the blood vessel to get the stent in place safely.

Dr Mohaned Egred, Consultant Interventional Cardiologist at Newcastle Hospitals NHS Foundation Trust, who offers the new procedure, says: ‘Calcium build-up can mean a stent won’t fit properly. The deposits cause the artery to stiffen, meaning it’s more likely to rupture if pressure is put on it from the inside by the stent, which can have catastrophic consequences.’ 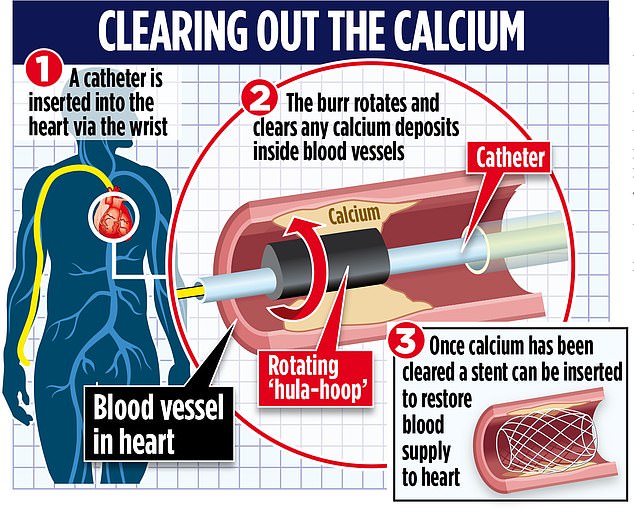 CLEARING OUT THE CALCIUM: How an orbital atherectomy procedure uses a rotating ‘hula hoop’ to clear clogged arteries

In these cases, removing the calcium – known as plaque – is vital. Procedures that attempt to do this already exist, but they are not always safe or effective.

The new method, called orbital atherectomy, is already offered in 16 NHS Trusts and experts hope more will soon take it up. It uses a flat metal ring, which rotates off-centre like a hula hoop toy, attached to the outside of a catheter – a thin flexible tube that is guided through the body’s blood vessels until it reaches the blockage.

The ring has a rough surface covered in microscopic diamonds, and when it is spun like a drill the corkscrew motion grinds down and removes the plaque.

More than two million Britons suffer from coronary heart disease and the condition is responsible for about 66,000 heart-attack deaths every year.

The majority of cases are treated with a stent, which is less risky than the alternative – a heart bypass operation where the blocked artery is cut out and replaced with a healthy blood vessel taken from another part of the patient’s body.

To fit a stent, a catheter is inserted into a vein in the wrist, with a tiny balloon attached which is inflated when it reaches the blocked area. This opens out the stent and squashes the plaque against the sides of the artery to allow blood to flow through freely.

However, when there is too much calcium and a stent cannot be fitted, the standard NHS operation to clear it is called rotablation. This involves inserting a catheter with a device attached that rotates like a drill bit.

The device works only when it is moving forward into the artery, meaning there is a risk it may cause damage to the blood vessel, and if the artery is wide it doesn’t always clear enough of the blockage.

In recent years a method called shockwave therapy has been developed, using blasts of ultrasound to clear calcium. But Dr Egred says that in ten per cent of cases, where calcium builds up on one side of the artery only, the energy from the shockwaves dissipates and fails to break down the deposits. There is also laser therapy, but the device is very expensive and used only in a handful of UK hospitals.

But with orbital atherectomy, both the diamond-covered ring and catheter rotate in a corkscrew motion inside the artery, which means it can work in wider arteries. 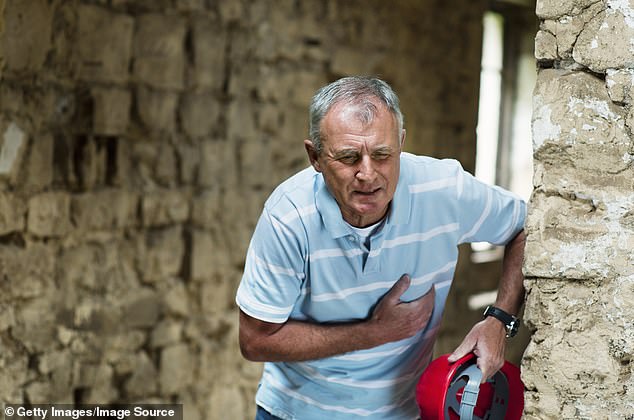 More than two million Britons suffer from coronary heart disease and the condition is responsible for about 66,000 heart-attack deaths every year (picture posed by model)

In a study of 433 patients undergoing the procedure, 98 per cent had a stent successfully fitted afterwards and three-quarters survived for a further three years without major problems such as heart disease, stroke or heart attacks.

One patient to benefit from the procedure is Keith Smith, 73, from Northumberland.

The retired engineer and great-grandfather- of-two suffered a heart attack in 2020 and had a stent inserted. But he was warned that he would eventually need stents in two more of his arteries because they had become blocked.

When Keith went for surgery at The Freeman Hospital in Newcastle last month, doctors discovered his arteries were calcified and were too wide for rotablation.

After undergoing orbital atherectomy, Mr Smith had two stents inserted and has been pain-free ever since. He said: ‘I’m over the moon that it was available. I owe those people my life and hope the procedure will be made available to more people.’