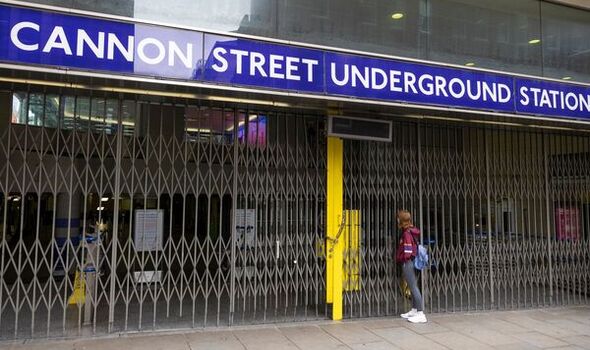 They were in line with the RPI rate of inflation, and workers pocketed £650 bonuses in both years – collectively worth £26million.

Pay freezes came into effect last year as a result of the pandemic but the RMT has been offered pay increases by Network Rail of at least two percent for 2022.

It rests on the rail union accepting modernised work practices, including workers being rostered at weekends.

RMT boss Mick Lynch had claimed: “They’re going to attack our terms and conditions…and we’ve had a pay freeze, we’ve missed two pay cycles with no increase during Covid, and we’re now entering the third one.”

A spokesman for Mr Lynch said that he was referring to staff employed by train companies, which run services, and not Network Rail, which operates and maintains infrastructure. Meanwhile, Britain faces months of crippling strikes as unions ramp up their plot to ruin summer.

More railway workers are to be balloted for walkouts in growing disputes over pay and jobs.

The union, led by Manuel Cortes, has warned action could take place on lines and at stations serving the Commonwealth Games in Birmingham, which runs from July 28 to August 8.

RMT strikes will cripple services from June 21 to 26. London Underground will be affected by separate RMT and Unite action on June 21, while Aslef members on Hull Trains, Greater Anglia and the Croydon Tramlink will stage a series of walkouts between June 23 and July 14.

The TSSA announcement came in the wake of a statement from Boris Johnson, who promised not to “surrender” to rail unions in their plot to create a “summer of discontent”.

TSSA is demanding a guarantee of no compulsory redundancies for 2022, no imposed changes to terms and conditions, and a pay increase that reflects the rising cost of living.

Mr Cortes said: “Our members deserve a pay rise and job security. Rail workers are seeking basic fair treatment, not to be sacked from their jobs, a fair pay rise in the face of a cost-of-living-crisis, and no race to the bottom on terms and conditions.

“Unless these demands are met, we could be seeing a summer of discontent across our railways in the run-up to the Commonwealth Games in Birmingham – the centre of many of our operators’ services.

“We are preparing for all options, including co-ordinated strike action, which would bring trains to a halt.”

Walker urged unions to “think carefully” about how the strikes could be “interrupting children’s opportunities in life” by disrupting their journeys to sit exams.

When asked about walkouts on LBC, he said: “I’m deeply concerned. It’s a great and positive thing that we have exams underway and that students are reaping the rewards for their hard work over the years by being able to take part in those.”

“It would be terrible if in any way this were disrupted by further industrial action.”

Mr Walker added that unions should be “coming back to the negotiating table” with the Government instead of striking.

The Labour Party has just provided a terrifying glimpse of the future if it regains power at the next election.

Under a cowardly Left-wing government led by Sir Keir Starmer, the trade union bullies would be back in charge.

Industrial relations would return to the dark days of the 1970s when Britain was known as “the sick man of Europe” because of the widespread militancy.

That is the only conclusion that can be drawn from Lisa Nandy, the senior Labour frontbencher, when she used a TV interview yesterday to express her full support for the rail strike later this month over pay and pensions.

Called by the hardline RMT union and the white-collar TSSA, the stoppage by at least 50,000 workers will effectively last a week and will be the biggest on the network for decades.

Despite the misery, Labour is acting as a cheerleader for the strike. The party, said Ms Nandy, is “on the rail workers’ side” because “they are really struggling to make ends meet”.

That is the voice, not of a credible alternative government, but of a political puppet controlled by wreckers who want to hold the country to ransom for their own selfish ends.

Nandy’s stance has been adopted by the other Labour MPs, like Ian Byrne, who proclaimed that “the British working-class should not have to beg”.

That sort of language demolishes the pretence that Labour has shifted to the centre since Jeremy Corbyn was ditched as leader in 2020. In truth, the party remains in thrall to the outdated ideology, methods and rhetoric of the socialist struggle against oppression.

With railways, such an outlook is ridiculous. Rail staff are far better off than most British workers.

In addition to job security, good pensions, limited hours and generous holidays, their median salary last year was £44,000, around 60 per cent higher than average pay.

On every level, Labour’s support for the strike is outrageous and economically illiterate. The railways, which this year will receive a massive subsidy of £16billion in the face of heavily declining passenger numbers, cannot afford an exorbitant pay demand.

Moreover, a large settlement for rail staff will feed a cycle of other unaffordable deals in the public sector, pushing up debt and inflation. Soon the nation could be in the grip of a summer of discontent, fomented in part by the reckless Opposition.

Labour has shown once again that they are unfit for office. The party was founded in 1900 as the political wing of the trade union movement and remains in that supine position to this day, with the militants proving much of Labour’s funding and dictating its policy.

Yet the unions, whose membership has halved in the last 40 years, are no longer the authentic representatives of the working-class. Instead, they have largely become – as in the railways – the defenders of narrow, public-sector privileges and outdated practices.

It says everything Labour should still be marching in lockstep with this “I’m All Right Jack” bunch of trouble-makers.

‘Labour has shown once again they are unfit for office’