The newly appointed Mr Sabisky quit his role tonight after a series of disturbing Twitter posts came to light, sparking comments from Mr Neil. Mr Neil said: Sabisky has resigned. Quelle surprise. Why, exactly, was he ever appointed? Is nobody vetted anymore for Downing Street?”

Mr Sabisky was given the role after Boris Johnson’s special advisor Dominic Cummings put out a post on his blog calling for “misfits”.

The post was designed to break down barriers and put more working class or free-thinking candidates in government positions.

Though this backfired when posts comparing women’s sport to the Paralympics were unearthed this week. 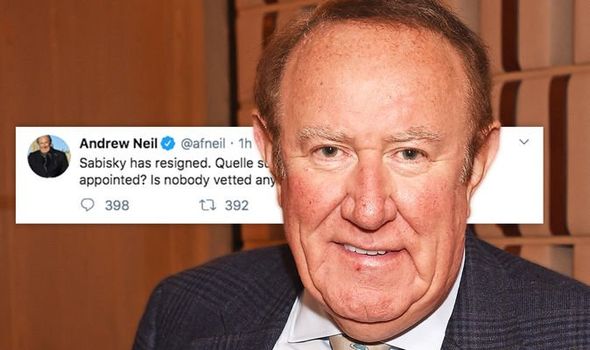 This evening Mr Sabisky posted a message on Twitter.

He said: “The media hysteria about my old stuff online is mad but I wanted to help HMG not be a distraction. Accordingly I’ve decided to resign as a contractor.

“I know this will disappoint a lot of ppl but I signed up to do real work, not be in the middle of a giant character assassination: if I can’t do the work properly there’s no point, & I have a lot of other things to do w/ my life.

“Last of all I am beyond grateful to everyone who supported me publicly & privately, all kinds of great friends, left & right wing alike – you’re the best people and eventually I will get around to thanking you all one by one.”