It comes after a petition demanding the end of the Northern Ireland Protocol which creates a border in the Irisih Sea between Ulster and the rest of the UK passed 100,000 signatures on Friday. This means that the issue will have to be debated in Parliament as UK ministers led by Michael Gove have started a delicate renegotiation with the EU on the issue.

The row has broken out after European Commission President Ursula von der Leyen last week evoked the Article 16 protocol to create a hard border in the island of Ireland in a bid to block vaccines coming to the UK.

The row managed to unite old enemies and rivals in condemnation of the commission including the Democratic Unionists, Sinn Fein, the Irish and British governments and the Conservative and Labour parties along with the US Government and World Health Organisation.

Brexiteers had already been pushing for a rethink of the protocol after initial problems saw delays in food reaching supermarkets in Ulster.

Writing for the Sunday Express in a piece co-authored with prominent Brexiteers Ben Habib, Baroness Hoey and DUP MP Sammy Wilson, Ms Foster argued that the idea that a customs union in the island of Ireland would breach the Good Friday Agreement had been a false claim. 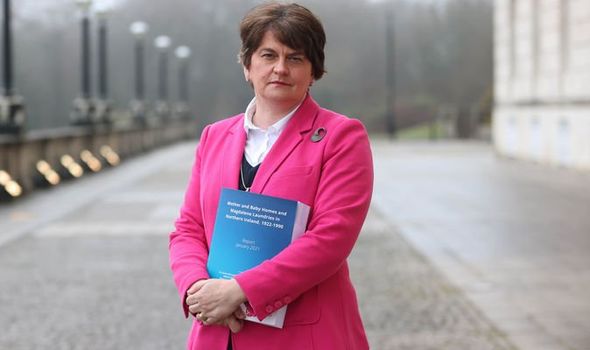 They said: “The false notion that a customs border on the island of Ireland would breach the Belfast Agreement is one put about during Brexit negotiations by the EU, Ireland and factions of remain in the UK, including members of our then government in order to frustrate, undermine and damage the British position in those negotiations. They succeeded.”The piece describes the protocol as “an affront to Northern Ireland’s existence” and demands that Mr Johnson himself invokes Article 16 permanently to bring an effective end to it.

“This article enables the UK unilaterally to take safeguard measures to restrict the Protocol if it should cause “‘serious economic, societal or environmental difficulties’.

“The Protocol is an affront to Northern Ireland. Its existence undermines the Belfast Agreement. The new Irish Sea border created by it has caused material difficulties for the people of Northern Ireland.”

In a scathing report for the Centre for Brexit Policy thinktank, Lord Trimble, who won the Nobel Prize for helping bring peace to Northern Ireland, said that the Northern Ireland issue in the Brexit negotiations “has been used as the Trojan Horse by which the EU has sought to undermine the UK’s attempt to gain back sovereignty.” 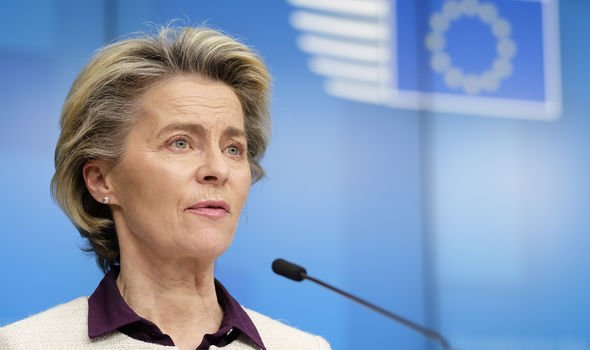 Mutual Enforcement would mean there would be no need for physical customs infrastructure on the border or checks on goods.

Under Mutual Enforcement, checks only need to take place on exports which cross the border between the EU and UK thus protecting UK sovereignty.

Lord Trimble said: “The system would not require border checks because any breaches could be notified to the UK authorities once they became obvious through checks at point of sale or distribution in the EU or spot checks on exporters in the UK. Severe penalties would act as a deterrent.

The report was also backed by former Tory leader Sir Iain Duncan Smith who warned that the protocol was a trap for the people of Northern Ireland.

He said: “The people of Northern Ireland are suffering because they remain trapped in the orbit of the EU. Trade with the mainland is being interrupted and consumers and businesses are losing out. This ingenious new proposal offers a solution that would benefit both sides. All it needs is a measure of trust – trust that both the UK and the EU would apply the other’s regulatory rules.”