Democrats fear that if the pandemic or the situation in Afghanistan continues to worsen, their party may lose the confidence of the moderate swing voters who lifted it to victory in 2020. 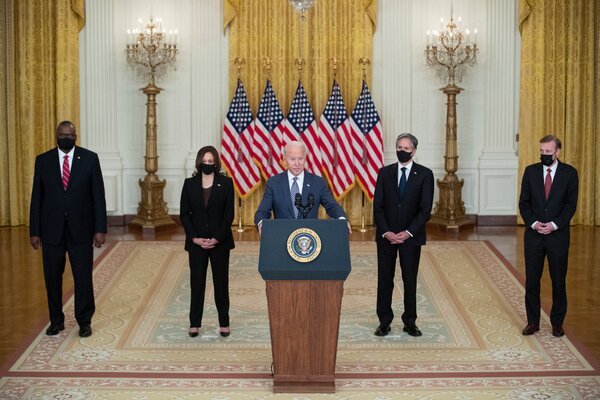 With President Biden facing a political crisis that has shaken his standing in his party, Democrats across the country are increasingly worried about their ability to maintain power in Washington, as his administration struggles to defend its chaotic withdrawal from Afghanistan and stanch a resurgent pandemic that appeared to be waning only weeks ago.

While Americans watched devastating scenes of mayhem at the Kabul airport and ascendant Taliban forces last week, the steady drumbeat of bipartisan criticism left many Democrats frustrated and dismayed at a White House they viewed as having fumbled the end of the country’s longest war on multiple fronts.

On Capitol Hill, lawmakers announced congressional investigations into the administration’s handling of the withdrawal, as a handful of Democratic lawmakers weighed whether calling for the resignation of Mr. Biden’s national security adviser, Jake Sullivan, would help the president “reset the narrative,” according to a Democratic House member, speaking on the condition of anonymity.

The harrowing images appalled even the president’s staunchest supporters, many of whom — like a majority of the American public — support the decision to remove American troops from Afghanistan. But some of them worry the execution of the withdrawal has undermined Mr. Biden’s central campaign promise to restore a steady hand to governance, particularly on issues of national security.

Interviews with more than 40 Democrats, lawmakers, strategists and party officials show a White House at a pivot point. If the virus continues to worsen or the situation in Afghanistan deteriorates further, many of the president’s allies fear he will lose the confidence of the moderate swing voters who lifted his party to victory in 2020. Already, Democrats in battleground districts have been sounding alarms that the party needs to become more aggressive with their messaging, particularly on the economy and the efforts to combat the surge in coronavirus cases fueled by the highly contagious Delta variant.

There are plenty of other reasons for Democrats to be worried: Historically, the president’s party loses seats in the midterm elections and the Republican advantage in redistricting has only increased those odds.

For many establishment Democrats, the Taliban’s rapid seizure of Afghanistan was the first time during Mr. Biden’s administration that they found themselves creating any daylight between themselves and the president.

“I consider Afghanistan a bone-headed mistake, unforced error,” said David Walters, a former Oklahoma governor who is now a member of the Democratic National Committee’s executive committee. “There is no real excuse. This was morally and politically a disaster and just bad policy.”

Yet, so far, most of the party has walked a fine line between expressing dismay at the current situation while not publicly denouncing the White House’s role in it.

“Afghanistan definitely has entered the conversation in a big way. We’ve done six or seven town halls in the last week and Afghanistan has come up in all of them,” said State Senator Jeff Jackson of North Carolina, an Army veteran who fought in Kandahar and is now running for the U.S. Senate. “It’s pretty clear there are concerns. They’ve seen the images we’ve all seen.”