Progressives have not ruled out reopening the deal that senators are painstakingly putting together, and they do not intend to take it up for months, until after their other priorities are addressed. 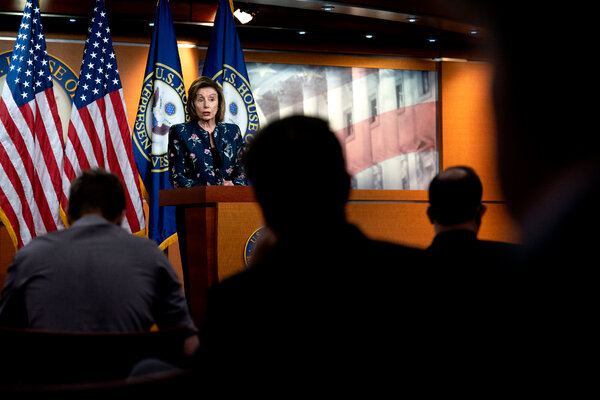 WASHINGTON — As senators grind through votes this week on a $1 trillion bipartisan infrastructure bill, discontent about the legislation is building among progressive Democrats, signaling a potentially bitter and prolonged intraparty fight to come over the package in the House.

Liberals who have bristled at seeing their top priorities jettisoned from the infrastructure talks as President Biden and Democrats sought an elusive deal with Republicans have warned that they may seek to change the bill substantially when they have the chance. At minimum, House Democrats have made clear that they do not intend to take up the bill until a second, far more expansive package to provide trillions more in spending on health care, education, child care and climate change programs is approved, something not expected until the fall.

The result is that, even as senators carefully navigate their sprawling infrastructure compromise toward final passage that could come within days — pausing every few hours to congratulate themselves for finding bipartisan consensus in a time of deep division — the legislation still faces a rocky and potentially slow path beyond the Senate.

Democrats hold a slim enough majority in the House that even a few defections could sink legislation, and progressives have been open in recent days about their reluctance to support the infrastructure legislation without an ironclad guarantee that the budget package, expected to cost about $3.5 trillion, will become law.

“The Progressive Caucus has had moral clarity, and a clarion call for three months, that we need to deliver the entirety of these two packages together, so that’s going to continue to be our approach,” said Representative Pramila Jayapal of Washington, the chairwoman of the group. “While there may be a couple of senators that are saying that they’re going to vote ‘no’ if certain things don’t happen, that is also true of any number of members in the House.”

In order to deliver on Mr. Biden’s $4 trillion economic agenda, Democratic leaders have remained adamant that they will approve two expansive bills this year, beginning with Senate passage of the $1 trillion bipartisan compromise, which would pour $550 billion in new federal funds into the nation’s aging roads, bridges and highways, and into climate resiliency and broadband expansion programs.

The remainder of Mr. Biden’s plans to address climate change, expand health care and provide free education will be stuffed into a budget package that Democrats plan to pass using a maneuver known as reconciliation. That process allows them to bypass a filibuster, meaning that if all 50 of their senators supported the bill, it could be approved over unified Republican opposition.