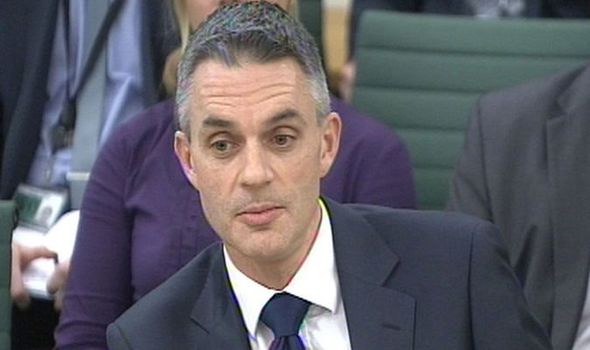 Mr Davie also insisted the BBC was right to start charging the over-75s for the licence fee. Ministers are currently in the final stages of negotiations with the broadcaster over how much public funding it will receive next year.

At a Commons committee yesterday, Mr Davie was asked if he had hired anyone to the senior BBC team who backed quitting the EU.

He replied: “I don’t know. We are hiring people all the time. I don’t know where my top team is on Brexit. We don’t talk like that.”

The BBC’s impartiality was called into question again with the recent appointment of journalist Jess Brammar, who has been publicly critical of Brexit and Prime Minister Boris Johnson, as head of news channels.

Mr Davie said: “We need to hire the best at the BBC and we need to hire across the political spectrum. That is an incredibly important precedent and this affair is dangerous territory for us.

“Not because of the process but because if people begin doubting our ability to hire people with views into the BBC, and when they get here they leave them at the door – political views.

Conservative MP Andrew Bridgen said that the absence of known Brexit supporters in the top ranks of the BBC shows why it is out of touch with the public.

He said: “There mere fact of that when the majority of the UK population, 52 percent, voted to leave shows how out of touch with mainstream public opinion the senior management of the BBC is living as it does in its metropolitan elite bubble and also demonstrates why their news and editorial lines are unattractive to the majority of people outside the M25.”

House visits will being this autumn for older pensioners who are refusing to pay the charge.

Mr Davie claimed the broadcaster “never supported the move” to impose the fee on the over 75s.

He said: “With the challenge we were given, I think the decision we have made is right, bearing in mind the amount of consumption among over-75s and the principle of fairness in terms of delivery of the BBC services.

“If we had taken that money out of the licence fee, by the way, with what we were facing, it would have been a savage, a major, cut.”

He added: “Have no doubt – we did not want to do it, but once we were given the challenge we made the right call. It was part of the deal, as we know, that we did.”

The corporation’s grace period giving the over 75s time to adapt after the licence fee was reintroduced last year ended in July.

It says “customer care” visits will be carried out with those who have not paid to allow it to “engage with the individuals we haven’t been able to speak to”.

Silver Voices said it will be sending members advice on what to say and do if they receive a visit, including refusing to allow licensing staff into their homes.

Director Dennis Reed added: “Tim Davie is talking like this is all over but he has still got to face his biggest decision on this, which is whether to take enforcement proceedings against the over 75s who are still holding out over a year on from the introduction of the charge.”

Mr Reed the director-general could have reversed the decision on reintroducing the fee for older viewers when he took up the position.

“He could have done a bargain with the government at that stage and he refused, so it wasn’t that much of a hardship for him to introduce the fee and it’s a bit lame now to suggest he didn’t want to do it.”