Samira Ahmed also criticised Conservative ministers saying they “won’t resign over obvious issues that you might have expected them to”. Her remarks were made during a live recording of her podcast “How I Found My Voice”, which she records outside of her BBC employment.

Ms Ahmed hosts the audience feedback show Newswatch as well as programmes on Radio 3 and Radio 4.

The non-BBC podcast was filmed on Wednesday with the presenter interviewing satirist and Have I Got News For You panellist Ian Hislop.

Referring to Mr Farage’s coverage on the public broadcaster, Ms Ahmed said she remembered complaining about “building up” Ukip’s profile.

She added: “I’m haunted by that and I remember talking to editors about it.” 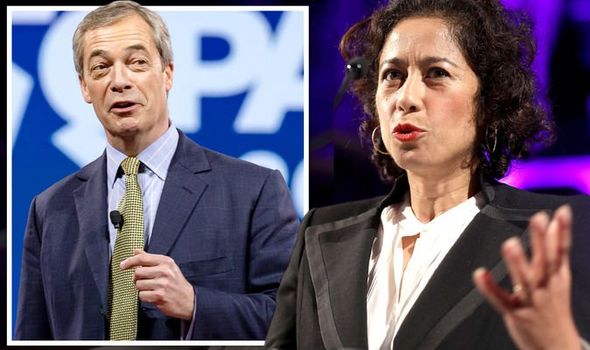 Her comments risk undermining the BBC’s vow to be impartial and come after director-general Tim Davie warned staff not to air their political views in public.

Restoring the BBC’s reputation after accusations of bias was central to Mr Dabie’s aims when he took on his role last September.

“If you want to be an opinionated columnist or a partisan campaigner on social media then that is a valid choice, but you should not be working at the BBC,” he said in his first speech to staff.

“It is about being free from political bias.

“This is more about whether people feel we see the world from their point of view.

“Our research shows that too many perceive us to be shaped by a particular perspective.”

“We have discussed the video with Samira and she is clear that she was referring to being ‘haunted’ by the number of complaints rather than trying to give a wider commentary.”