The EU has lashed out and accused the UK of breaking international law for a second time. The bloc has said the UK’s grace period extension for Irish Sea border checks breaches international law. Chief Secretary to the Treasury, Steve Barclay, told Emily Maitlis on Newsnight that Brexit Britain was determined to support all UK business going forward.

Ms Maitlis said: “You can protect business by working with others.

“I just wonder whether that’s how you see global Britain now?

“Considered by our nearest allies to be untrustworthy or a bit sneaky doing things on our own instead of waiting for our partners to work with us.”

Mr Barclay insisted the UK was determined to have a good relationship with the EU going forward. 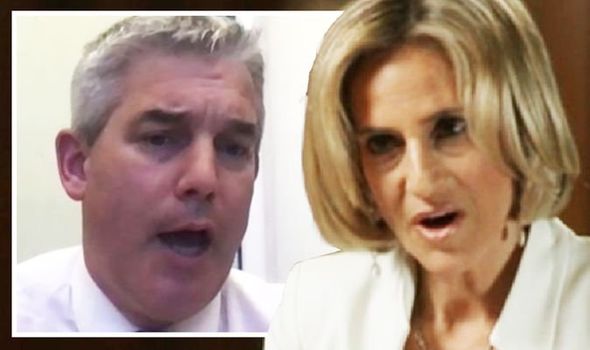 He said: “No, I think we have always been clear.

“The Prime Minister has always been clear that we want to have a good relationship with our European partners, to be good allies and that.

“But at the same time we will defend the United Kingdom and ensure that business between Northern Ireland is supported and that is where Lord Frost and others are particularly focussed.”

He added the Budget had highlighted the UK’s determination to support its European partners.

Ms Maitlis said: “When you use the word defend, it as if you don’t think the other side, the EU or Ireland, is on your side?

Mr Barclay again reiterated the UK’s commitments and noted the UK was set to support Ireland with the 2030 World Cup,

Mr Barclay replied: “I think that if you look at the Budget today, one of our announcements was to support the 2030 World Cup.

“This is where we’re going to be working with the Irish Government as part of a UK-Ireland bid.

“There are many areas where we are keen to work with our European partners, including on the vaccines and on ensuring the response through COVAX and other areas.

“Another area, ensuring the Northern protocol operates effectively but also in terms of the effectiveness of the support we offer the business community in Northern Ireland.

“The Budget set out a range of measures to support businesses across the UK including in Northern Ireland as a key focus of the Government and it was a key theme of the Budget.