Both new leaders have struck a supportive tone after signs of strain in the longtime allies’ bond. But they still have vast differences on policy. 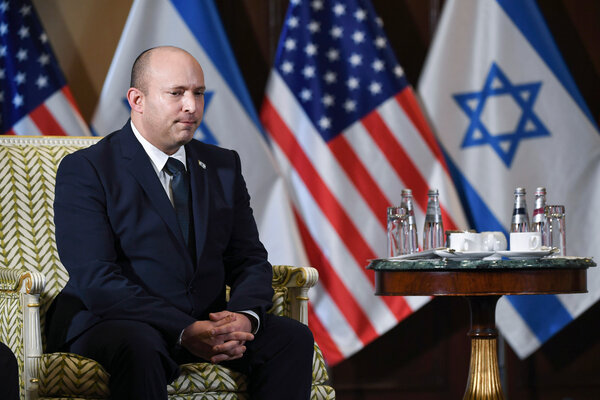 WASHINGTON — When Prime Minister Naftali Bennett of Israel meets President Biden at the White House on Thursday, the two new leaders plan to seek a reset in relations between their countries and reinforce a bond that has showed signs of strain.

Mr. Biden, who called Mr. Bennett to congratulate him less than two hours after his swearing-in two months ago, has tried to send a clear signal that the United States supports his new, diverse, coalition government.

Mr. Bennett has said that he wants his administration to be known as the “good-will government,” and that he wants to take a softer tone toward the United States than did his longtime predecessor, Benjamin Netanyahu, who often clashed with Democratic leaders.

But for all the conciliatory style, the challenge may be the substance. Mr. Biden and Mr. Bennett, who have never met before, have vastly different views of the Israeli-Palestinian conflict, and of efforts to restore the Iran nuclear deal.

Mr. Bennett also opposes the United States’ re-entry into the Iran agreement, which the Biden administration is exploring.

“These are two very central issues in the U.S.-Israel relationship on which there are radically different points of view,” said Jeremy Ben-Ami, the president of J Street, a liberal pro-Israel advocacy group. “The tone and the atmosphere cannot substitute for the fact that there is a fundamental difference in view on the core issues at stake in the U.S.-Israel relationship.”

In a recent interview with The New York Times, Mr. Bennett said he would expand West Bank settlements, a move Mr. Biden opposes. And he declined to back American plans to reopen a consulate for Palestinians in Jerusalem.

Still, he made clear that he wanted the meeting to show that the relationship with the United States was on more solid ground, even if some of his policies are similar to those of Mr. Netanyahu.

“There’s a new dimension here — coming up with new ways to address problems, being very realistic, very pragmatic, and being reasonable with friends,” Mr. Bennett said.

His visit comes as Mr. Biden is navigating the biggest foreign policy crisis of his young presidency, trying to evacuate all Americans and Afghan allies from Afghanistan before his Aug. 31 deadline for a withdrawal of U.S. troops from the country after 20 years of war.

At home, Mr. Biden is dealing with crosscurrents over Israel in his own party, as an energized progressive wing and a quiet shift among more mainstream Democrats have led many lawmakers to take a more skeptical approach toward the longtime ally.

Mr. Bennett is also the rare international leader that Mr. Biden, a former chairman of the Senate Foreign Relations Committee, shares no history with, a distinction that sets Mr. Bennett apart even from some of his neighbors. Last month, when King Abdullah II of Jordan became the first Arab head of state to visit the White House since Mr. Biden took office, the president called him a “loyal and decent friend” and noted, “We’ve been hanging out together for a long time.”