Unfolding in a stable presidential race and a tumultuous election year, the debate may be less likely than past ones to sway voters. But it is still an opportunity for President Trump in particular. 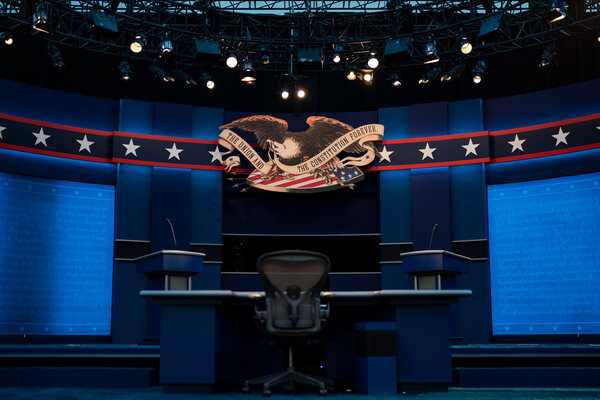 By Shane Goldmacher and Adam Nagourney

President Trump and Joseph R. Biden Jr. will walk onto the first presidential debate stage of the 2020 general election with a very different set of political incentives.

For Mr. Trump, it is a much-welcomed chance to shake up a race in which he is currently behind. For Mr. Biden, the debate is a risky but necessary step, a close encounter with an unorthodox rival who can and will say almost anything.

After complaining for months about Mr. Biden’s “basement” strategy, the debate is Mr. Trump’s biggest opportunity to reframe the election as a choice between two competing visions. The Biden campaign continues to cast the race chiefly as a referendum on Mr. Trump’s failures in responding to the coronavirus pandemic.

Two things can be true at once about the stakes of the debate.

First, the presidential race so far has been an extremely stable affair, with little disrupting Mr. Biden’s consistent polling lead — not a pandemic, not record joblessness, not mass protests over policing and racism, and not an unexpected Supreme Court vacancy. A 90-minute debate will be hard-pressed to move the needle more than those factors.

Second, the debate still represents one of Mr. Trump’s best opportunities to jostle the current dynamic, his first chance to speak directly to an audience of tens of millions of Americans alongside Mr. Biden.

With that in mind, here is what to watch during the debate. The Times will be livestreaming the event and providing live analysis.

How quickly does it go off the rails?

Mr. Trump has always been a showman, and debates have been some of his biggest stages as a politician. He jawbones, interrupts and lashes out in unusually personal ways, and he generally exerts an intense gravitational pull toward whatever he wants the spectacle to be about.

He is all but certain to attack Mr. Biden. It’s also possible he will go after the moderator, Chris Wallace of Fox News, whom the president has repeatedly compared unfavorably to his father, the former TV correspondent Mike Wallace.

What past campaigns have shown is that the first half of the first debate often sets the tone — and the tone of news coverage.

Mr. Biden has been pretty clear that he believes that Hillary Clinton erred four years ago in her debates with Mr. Trump by getting into a back-and-forth argument about character. “She did what every other candidate probably would have done,” Mr. Biden said in January. The resulting debate was an ugly spectacle and, he said, “it all went down the drain.”

Mr. Biden wants to avoid that — and he has been stress-tested by advisers not to respond to Mr. Trump’s obvious provocations if they are not central to his own message.

“I hope I don’t get baited into getting into a brawl,” Mr. Biden said this month.

One wild card is how Mr. Trump’s tactics and antics will play — and how the president, who feeds off the feedback of a crowd, will respond in a debate hall without a large audience.

For months, Mr. Trump and his surrogates have distributed unflattering and sometimes manipulative clips of Mr. Biden pausing awkwardly, stumbling verbally or just looking lost. It has been part of a concerted campaign to insinuate — and sometimes say aloud — that Mr. Biden’s mental faculties are too diminished for him to serve as president.

This is not typically how expectations-setting works.

Mr. Trump has lowered the bar so far — even demanding Mr. Biden take some kind of drug test — that his supporters are primed to expect a blowout on Tuesday. But Mr. Biden, even if he meandered onstage at times, ultimately won his party’s nomination after navigating 11 primary debates.

Mr. Biden was memorably knocked off guard by the rival who would become his running mate, Senator Kamala Harris of California, when she attacked him for his opposition to busing decades ago.

Mr. Trump has repeatedly benefited in news coverage from an expectations gap of his own: Whenever he tones down his bombast — however fleetingly — some praise tends to come in for a new tone.

“Any time he utters a complete and calm sentence, people fall over themselves to call him presidential,” said an exasperated Lis Smith, a Democratic strategist who helped run Pete Buttigieg’s debate preparations during the 2020 primary.

Can Trump get under Biden’s skin?

Will Mr. Trump successfully goad Mr. Biden into losing his temper? Or will Mr. Biden be able to avoid walking into the trap?