WASHINGTON — Lisa Monaco was President Barack Obama’s top counterterrorism adviser when she was handed an intractable problem: Fix the administration’s ineffective response to the kidnappings of Americans by Islamic State fighters, which had prompted outcries from victims’ families, without changing the government’s refusal to make concessions to terrorists.

Ms. Monaco quickly instituted a change, according to Matthew Olsen, a former director of the National Counterterrorism Center. She mandated that the families, who had been kept in the dark about the government’s restrictions and had even faced threats of prosecution should they pay ransoms themselves, be brought into the fold. Most had lost faith in the government, and she sought them out to ensure that a new hostage policy was fair and credible.

“For the administration to realize it was not handling this right was a lot to Lisa’s credit,” said Diane Foley, whose son James Foley was the first American to be beheaded by the Islamic State in 2014. After Ms. Monaco’s team completed its review, the administration adopted a policy that included advising families of all their options and refraining from threats of prosecution. Mr. Obama acknowledged that the government should have treated them as “trusted partners.”

Now Ms. Monaco, 53, a veteran of national security roles, is poised to become the deputy attorney general — the Justice Department’s No. 2 official — where her ability to broker consensus on politically charged issues will quickly be tested. Among other matters, she is expected to be a key player in the Biden administration’s push to combat domestic extremism, embodied most publicly in the Justice Department’s investigation into the deadly Capitol attack on Jan. 6 by a pro-Trump mob.

Her experience with cyberissues will help give her office an influential voice as the Biden administration confronts threats from countries like Russia, which it penalized on Thursday for hacking American government agencies and companies and for interfering in the 2020 presidential election.

Ms. Monaco will also work closely with Attorney General Merrick B. Garland to rebuild trust in the Justice Department after it became a target of President Donald J. Trump and his allies.

Her résumé makes her uniquely suited to tackle the department’s biggest issues, which include not only domestic extremism but also foreign cyberattacks, a sensitive investigation into Mr. Biden’s son and an open special inquiry into the roots of the Russia investigation. 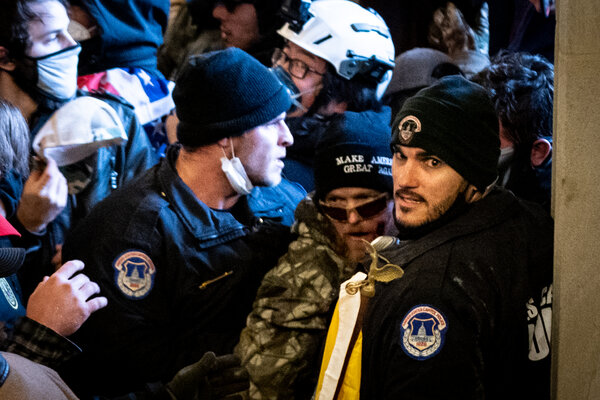 Ms. Monaco is also known for being careful to build support for her views. “Good ideas die all the time because people don’t go to the right congressman or cabinet secretary and get buy-in,” said Ken Wainstein, who was Ms. Monaco’s predecessor as the head of the Justice Department’s national security division. “That’s the kind of thing that Lisa is masterful at.”

The Senate Judiciary Committee voiced unanimous support for her nomination last month and a bipartisan coalition of senators is expected to confirm her in the coming days.

The riot investigation is a major undertaking that will be part of Ms. Monaco’s purview should she be confirmed.

“After 9/11, a key challenge for F.B.I. and Justice Department was protecting the country from foreign and foreign-influenced attackers while respecting privacy, civil rights and civil liberties,” said Jessie K. Liu, a partner at Skadden, Arps, Slate, Meagher & Flom and a former U.S. attorney in Washington. She worked briefly with Ms. Monaco when they were both prosecutors in the U.S. attorney’s office in Washington.

“Today, they face a similar challenge as the department seeks to counter violent domestic extremism,” she added.

Investigators and prosecutors quickly charged more people after the Capitol breach than in any other investigation in department history, but they sometimes disagreed on aspects of the inquiry, including whether to approach the attack as a straightforward criminal investigation or a national security intelligence operation, what to do about pleas and how aggressively to charge rioters, according to two people with knowledge of the discussions.

Ms. Monaco will not only referee internal disputes, but she will also weigh in on consequential and potentially politically fraught decisions, like whether to charge rioters with sedition. Republicans could criticize such a charge as a way to target Mr. Trump’s supporters. Democrats, who often refer to the rioters as insurrectionists and domestic terrorists, could be angered if no sedition case is brought.

Amplifying pressures on the department, Senate committees have held public hearings on the security failures leading up to the attack and House Democrats have requested related intelligence from federal agencies and local law enforcement.

A native of the Boston suburbs, Ms. Monaco graduated from Harvard University and the University of Chicago Law School before serving as counsel to Janet Reno, then the attorney general. She worked as a federal prosecutor in Washington and joined the Enron task force, helping lead the prosecution of five former Enron executives.

The Enron case fast-tracked her career. In 2006, she worked as counselor and then chief of staff to the F.B.I. director at the time, Robert S. Mueller III. In 2011, she became head of the Justice Department’s national security division. Two years later, she went to the White House to serve as Mr. Obama’s top homeland security adviser, where she coordinated the administration’s response to threats like the Ebola outbreak in 2014 and the mass shooting in 2016 at the Pulse nightclub in Orlando, which was deemed an act of domestic terrorism.

Ms. Monaco always had a knack for anticipating the next big threat, former colleagues said. During her time leading the department’s national security division, she initiated its effort to go after Chinese cyberthreats. That ultimately led to the 2014 indictment of five members of China’s People Liberation Army on charges of stealing proprietary information from U.S. Steel and other companies, in a case that has helped the government push back on China’s efforts to use stolen trade secrets and academic research to bolster its global standing.

“We should be calling out and imposing costs against these malicious cyberactors,” Ms. Monaco said at a conference in 2018, noting that hackers in Iran, North Korea and Russia had taken aim at American companies. “The Trump administration has basically kept that philosophy, but accelerated it, and rightly so.”

Ms. Monaco had ample opportunity to learn about navigating bureaucracy under Mr. Mueller, who faced pressure to prevent a major terrorist attack, and to break up the F.B.I. as the government’s failures leading up to the Sept. 11 attacks were revealed. Instead, he transformed it into an agency that served two missions: both its traditional role of investigating crimes and an intelligence-gathering function working with the intelligence community to thwart any attacks.

“She was directly involved in the development and mobilization of every F.B.I. initiative, ensuring that the bureau coordinated and integrated that work with the rest of the government, getting buy-in from main Justice and, when necessary, the White House and lawmakers,” Mr. Wainstein said.

Ms. Monaco has a reputation for working and preparing relentlessly. She is even-tempered and exhibits a quiet, firm confidence, even under pressure, friends and former colleagues said. She does not raise her voice. Friends called her funny and warm and self-deprecating in the face of praise. When a fellow department alumnus took note of her remarkable career, she replied, “I’ve been very, very lucky.”

As Mr. Obama’s homeland security adviser, she presided over decisions with difficult operational, policy and legal dimensions, and they often involved military action. A disagreement or a provocative question could derail hours of work, and it could be hard to get people back on track, former colleagues said.

“She was a lawyer at a table with military leaders. She had to earn their respect and lead them toward the conclusion that was consistent with what the president wanted from the process,” Mr. Olsen said. “She was able to pull that off time and time again.”

“Her trial lawyer experience in D.C. superior court likely served her well,” Mr. Olsen said. “Not everything will go as planned. Your police officer won’t show up to testify and you have to keep a poker face before the jury. You manage her way through that by keeping calm and appealing to people’s better natures. I’ve seen her do that in the Situation Room” at the White House.

In 2013, the Boston Marathon bombing tested her skills and resolve. The attack happened in Ms. Monaco’s hometown as her brother stood among the crowd, cheering on the runners.

Her knowledge of domestic extremism and the workings of the government, her work ethic and her ability to corral colleagues were crucial to helping the Obama administration respond, Mr. Olsen said.

Reflecting on the Boston Marathon bombing, Sept. 11 and other national security challenges, Ms. Monaco warned in 2016 that “the terrorist threat has evolved, and it’s done so dramatically.”

“It is broader, more diffuse and less predictable than at any time since 9/11,” she said at an event hosted by the Council on Foreign Relations. “Terrorism today is increasingly defined by small cells or lone actors, sometimes with little or no direct contact with terrorist organizations. Those people have succumbed to violent extremism.”