The prime-time speech comes amid deep national divisions. According to a recent poll, nearly three-quarters of Americans believe the nation is heading in the wrong direction. 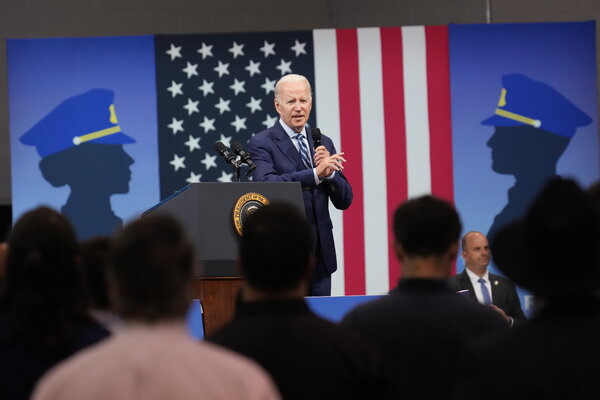 WASHINGTON — When President Biden travels to Philadelphia on Thursday, he will turn his attention to the threat to American democracy, the very issue he said drove him to run for the presidency in the first place.

More than a year and a half after Mr. Biden pledged during his inauguration to “restore the soul and to secure the future of America,” he still believes democracy is in peril.

White House officials said Mr. Biden is expected to use the prime-time speech to take direct aim at the Republican Party as Democrats fight to retain their hold on Congress in the midterm elections in November.

“The MAGA Republicans are the most energized part of the Republican Party,” said Karine Jean-Pierre, the White House press secretary. She said they present “an extreme threat to our democracy, to our freedom, to our rights. They just don’t respect the rule of law.”

More Coverage of the 2022 Midterm Elections

Republicans have cited Mr. Biden’s rhetoric as evidence that he has fallen short of his promise to bring the nation together.

“Biden has pitted neighbors against each other, labeled half of Americans as fascist, and tarnished any idea of his promise of ‘unity,’” Emma Vaughn, a Republican National Committee spokeswoman, said in a statement.

Thursday will be Mr. Biden’s second visit to Pennsylvania in three days, and he is expected to make a third on Labor Day. Pennsylvania, a swing state, will hold crucial races for the House and Senate as well as a closely watched governor’s race.

During Mr. Biden’s first year in office, he promised to bring a sense of normalcy to the White House and he largely ignored former President Donald J. Trump. But Mr. Trump is once again at the fore, with investigations into the Jan. 6 attack on the Capitol and an F.B.I. search of his Florida home for classified documents, and Mr. Biden is trying to frame a vote for Republicans as a vote for extremism.

The speech comes at a time of deep national divisions.

According to an NBC News poll released last month, nearly three-quarters of Americans believe the nation is heading in the wrong direction. The F.B.I. and Department of Homeland Security have issued multiple warnings about false claims about election fraud motivating extremists attacks.

“We are in a crisis in this country. There’s no doubt about it. Not just in terms of the sanctity of the vote or trusting our votes will be counted,” said Allida Black, a University of Virginia historian who had a private meeting with Mr. Biden to discuss the state of democracy last month. “We seem to attack rather than embrace responsibility and accountability.”

It is not the first time Mr. Biden has delivered a speech that is not about policies or campaigns but rather the morality of the nation. He said he was inspired to run for office when white supremacists marched through Charlottesville, Va., in 2017. He had a “soul of the nation” bus tour during the presidential campaign and committed to unifying the nation during his inauguration.

Ms. Jean-Pierre said on Wednesday that Mr. Biden was working with senior advisers on drafts of his speech for Thursday.

“He sees the challenges increasing. He sees the threats increasing,” Ms. Black said, adding that the speech was a way for Mr. Biden to convey “I’m not backing down.”