Joseph R. Biden Jr. on Wednesday sought to energize Democratic voters over the battle to replace Justice Ruth Bader Ginsburg on the Supreme Court, warning that if Republicans confirmed President Trump’s expected nominee, “women’s rights as it relates to everything from medical health care is going to be gone.”

“The Democrats should be going to the American people now — their voices are about to be heard, and it’s important that they make clear what’s going to happen,” Mr. Biden told reporters in Delaware before flying to host a Black economic summit meeting in Charlotte, N.C., the largest city in an important battleground.

The death of Justice Ginsburg on Friday has injected new uncertainty into an already volatile presidential calendar, with both political parties seizing on an issue that could fire up their bases even more.

Many Democrats, including Mr. Biden, have forcefully argued that Americans should be able to make their voices heard on Election Day as to which presidential candidate they want to determine the makeup of the nation’s highest court for years to come.

Republicans, however, have maintained that voters have already made their preferences clear by delivering them both the presidency and a Senate majority. Mr. Trump has said he would announce a nominee to fill Justice Ginsburg’s seat on Saturday, 38 days before Election Day.

Enough Republicans have indicated that they would not oppose a vote on Mr. Trump’s pick to all but guarantee that the Senate will confirm a new justice who would tilt the court decisively to the right.

The president has promised to appoint justices who would be open to overturning Roe v. Wade, the 1973 ruling that legalized abortion, and his short list for Justice Ginsburg’s seat includes judges who have delivered staunchly conservative decisions, like Judge Amy Coney Barrett of the Court of Appeals for the Seventh Circuit.

But while Mr. Biden on Wednesday again laid out the high stakes of the confirmation fight, he did not echo some of the calls to action Democrats have made in recent days, including suggestions that they should pack the court if Republicans push Mr. Trump’s nominee through and Democrats win the White House and a Senate majority in November.

“We should go to the American people, make the case why this is a gigantic mistake and abuse of power,” Mr. Biden told reporters, arguing that the Supreme Court could issue rulings that have significant consequences for women in particular.

“Women will be able to be charged more than men for the same procedures again,” Mr. Biden said, apparently alluding to worries among Democrats that a more conservative court could strike down the Affordable Care Act. “Pregnancy will be a pre-existing condition again.” 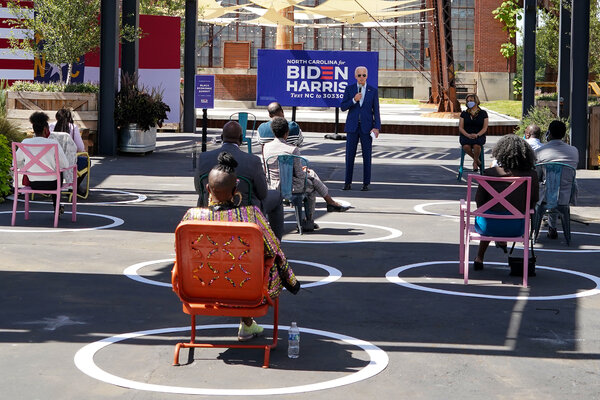 At the Black economic summit later on Wednesday in Charlotte — where he was introduced by Chris Paul, the basketball star — Mr. Biden did not mention the Supreme Court, though he did urge people to “show up and vote.” Among the topics he addressed were raising the minimum wage to $15 an hour and his plans to support historically Black colleges and universities.

“As bad as things have gotten, the blinders have sort of been taken off the American people now,” he told a group of socially distanced participants, including small-business owners and local leaders from the Black community.

“Average people have gone, ‘My lord, holy mackerel, I didn’t know it was this bad,’” Mr. Biden continued, adding that the country had “a gigantic opportunity to fundamentally change the systemic racism and the systemic problems that exist in our system.”

Mr. Biden, in response to a question from Malcolm Graham, a Charlotte City Council member, also swiped at the Justice Department under the Trump administration, saying it had “turned into the president’s private law firm.”

“It’s the most dangerous thing that’s happened so far, is the politicization of the Department of Justice,” he said. “It’s become the Department of Trump, and that’s wrong,” he added, vowing that he would “not politicize” the department if elected.

“The Justice Department under my administration will be totally independent of me,” he said.