WASHINGTON — Members of Congress have begun a frenzy of lobbying to ensure that their pet projects and policy priorities are included in President Biden’s $2 trillion infrastructure and jobs plan, eager to shape what could be one of the most substantial public works investments in a generation.

Officials across the country are dusting off lists of construction projects and social programs, hoping to secure their piece of a plan aimed at addressing what the administration estimates is at least $1 trillion worth of backlogged infrastructure improvements, as well as economic and racial inequities that have existed for decades.

Senior lawmakers have started collecting lists of requests from their colleagues for what should be included in the bill, while top White House officials are fielding a torrent of calls from rank-and-file lawmakers, all of whom have their own ideas.

“My phone is blowing up,” Pete Buttigieg, the transportation secretary, said in an interview. Nearly every lawmaker “can point to a road or a bridge or an airport” in his or her district that is in dire need of repair.

“There’s a ton of interest from Congress,” he said.

On Monday, Mr. Biden is set to meet at the White House with a group of Republicans and Democrats to discuss the plan, part of a push to forge a bipartisan compromise that may ultimately prove futile given G.O.P. resistance to the scope of the package. The five cabinet officials tapped to navigate the infrastructure package through Congress, including Mr. Buttigieg, are continuing to discuss the plan with both Republicans and Democrats.

“The door is open,” Speaker Nancy Pelosi of California said on Sunday on CBS’s “Face the Nation.” “Our hand is extended. Let’s find out where we can find our common ground. We always have a responsibility to strive for bipartisanship.” 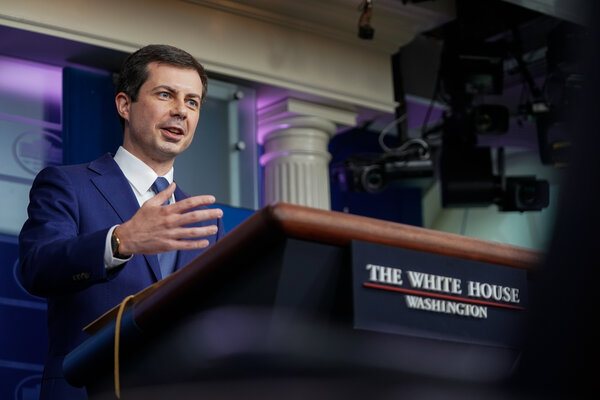 The process is crucial to Mr. Biden’s strategy for maneuvering the far-reaching plan through a Congress where his party has minuscule majorities, at a time when the space for a bipartisan compromise is narrow and even Democrats differ on how to structure and pay for such a huge package. Mr. Buttigieg said Sunday on Fox News that Mr. Biden wanted to see “major progress in Congress” by Memorial Day, and lawmakers are eager to weigh in.

Representative Mikie Sherrill, Democrat of New Jersey, wants to tackle the Gateway rail tunnel under the Hudson River. Senator Mitch McConnell, Republican of Kentucky and the minority leader, has suggested that surely the “functionally obsolete” Brent Spence Bridge in his state should receive funding. And progressive lawmakers have a five-part wish list that includes lowering drug costs and providing a pathway to citizenship for undocumented workers.

“If you want to get broad, bipartisan support, you invite other people to have some input into the process,” said Senator Thomas R. Carper of Delaware, who leads the Environment and Public Works Committee. “Every senator has shared with us the priorities of their states. We’re getting good ideas.”

Representative Peter A. DeFazio of Oregon, the chairman of the Transportation and Infrastructure Committee, and the committee’s top Republican, Representative Sam Graves of Missouri, are also asking lawmakers to identify priorities in their districts.

“I’ve been called the tunnel-obsessed congresswoman,” Ms. Sherrill said in an interview. “The Gateway Tunnel is the nation’s most important piece of infrastructure given the amount of people who go through the Hudson River tunnels, how decrepit they are and the economic blow we would take if those tunnels collapsed in any way.”

While infrastructure has long been hailed as the policy area with the ripest prospects for bipartisan cooperation, Congress has failed in recent years to agree on legislation that would fund long-term transportation projects beyond routine reauthorization of funding.

With Democrats newly in charge of both chambers of Congress and the White House, Mr. Biden is thinking much bigger. His proposal includes not just trillions in spending for highways, bridges and other physical facilities, but also huge new investments in areas that have not traditionally been seen as infrastructure, such as paid leave and child care.

That view, which critics say is too expansive and some progressives say needs to be bigger, has emboldened lawmakers in both chambers to try to use the package to accomplish all manner of policy priorities.

“Members are going to try to put as much on this vehicle as possible,” said Senator Benjamin L. Cardin, Democrat of Maryland.

While Republicans in both chambers have signaled that they are reluctant to support such an expensive and sweeping proposal paid for by tax increases, they are working to influence a final product that many of them may ultimately refuse to support.

“I think all of us would agree that we need a robust infrastructure package that focuses on roads, bridges, airports, seaports, water systems and broadband, but this proposal goes way beyond that,” Senator Susan Collins, Republican of Maine and a member of a bipartisan group searching for compromise, said in an interview. “It seems to me that our first goal should be to try to shape the package and reduce its cost.”

Mr. Biden and Democrats have repeatedly challenged Republicans to engage in bipartisan negotiations. By incorporating Republicans’ proposals, including individual projects for their districts and states, Democrats hope to increase the political risks of voting against the bill. Some Republicans are already facing criticism for celebrating funding in the nearly $1.9 trillion pandemic relief package they unanimously opposed.

Yet the infrastructure measure has a far more bumpy path to enactment than the stimulus package, which Democrats muscled through last month without any Republican votes. With narrow majorities in both chambers and conflicting ambitions for what could be one of the few major legislative vehicles this year, Democratic leaders are facing a steep challenge in steering the package through Congress.

“I think the American people want us to take a very broad look at what infrastructure means, and to address these crises, as soon as possible,” said Senator Bernie Sanders, the Vermont independent who leads the Budget Committee.

Knowing that the measure will include tax changes to help pay for some of the plan, some moderate Democrats from high-tax states have pushed for a repeal of the so-called SALT cap, which limits the amount of state and local taxes that can be deducted from federal income taxes. Others have warned that Mr. Biden’s proposal to increase corporate taxes to 28 percent from 21 percent is too steep.

Representative Richard E. Neal of Massachusetts, the chairman of the House Ways and Means Committee, has suggested bringing back Build America Bonds created after the Great Recession to help states and cities borrow money for infrastructure projects. Senate Democrats have unveiled their own plans to pay for parts of the package by raising taxes on multinational corporations that stash profits overseas.

“I think everyone realizes that we have to come together because failure is not an option,” Senator Chuck Schumer of New York, the majority leader, said in an interview. The administration, he said, is “going to talk to many members — it is a big, broad bill — and try to incorporate some good ideas that other members have, too.”

Mr. Schumer noted that the Biden administration had already included two of his priorities — funding to transition to clean cars and legislation meant to strengthen American technology investments and research — in the package, and will most likely accommodate other changes.

Mr. Buttigieg would not provide specifics on how officials would choose which transportation projects would get funding. But he said there would most likely be a mix of ways to fund proposals, including through existing grant programs and the creation of new funding streams.

In an email sent to congressional lawmakers last week, officials from the Transportation Department provided preliminary details on how $621 billion of Mr. Biden’s proposal could be spent on transportation and infrastructure projects. The largest allocations included $174 billion for electric vehicles, with another $115 billion to repair and build roads and bridges.

Officials proposed $85 billion for public transit, $25 billion for airports and $17 billion for ports and waterways. The email, obtained by The New York Times and first reported by Roll Call, stressed that the numbers outlined were preliminary and could be revised during negotiations.

While many details of the package remain undecided, towns, cities and states around the country already have designs on the funds. Highway projects of varying sizes — such as $204 million in renovations to roads in Lane County, Ore. — could receive long-awaited funds, according to an analysis from the National Association of Counties, an advocacy group. The administration has highlighted the Claiborne Expressway in New Orleans and the I-81 highway in Syracuse as opportunities to reduce racial inequity caused by highway construction.

Bridge projects, which face a nearly 40-year backlog of repairs, will have no shortage of competition for funding. Projects that already have local tax funds approved, such as a $54 billion initiative to expand light-rail systems across the Seattle region, could also be competitive for federal funding, experts said. Amtrak officials have signaled that they could expedite the creation of a national rail service that reaches an additional 160 communities in the United States.

Beth Osborne, the director of Transportation for America, an advocacy group, said the process of sorting through the competing priorities to produce the package will be a grueling one.

“God bless these staffers and members who have to figure this out,” said Ms. Osborne, a former Senate aide who helped work on the 2009 stimulus law. “On one hand, it’s going to be tough. On the other hand, this is why people come to D.C. to work.”