Speaking to the Express.co.uk ahead of the EU’s proposed coronavirus recovery fund, Italian Senator Gianluigi Paragone claimed the mainstream media in Italy is “telling big lies” about Brexit. The founder of the new eurosceptic party ‘No Europe for Italy – Italexit’ argued europhiles in Italy fear the UK’s success outside of the Brussels bloc could spark a dangerous domino effect among other member states.

He said: “Usually when people talk about the United Kingdom in Italy they tell big lies.

“In the sense that they are always there to tell the story, that the Italian press obviously really likes, that the British regretted the referendum and Brexit.

“It is easy for me to recall that the British not only voted to Leave in that referendum once, but the Leave vote was also substantially confirmed in subsequent votes.

“So I think the British are still strongly convinced and have made a conscious choice.

“What the British have saved financially could be the subject of food for thought.

“I don’t understand why we have to continually wake up to give Europe more and more in order to have a return of a few euros in the net balance and certainly with those few euros you will not recover from the crisis. 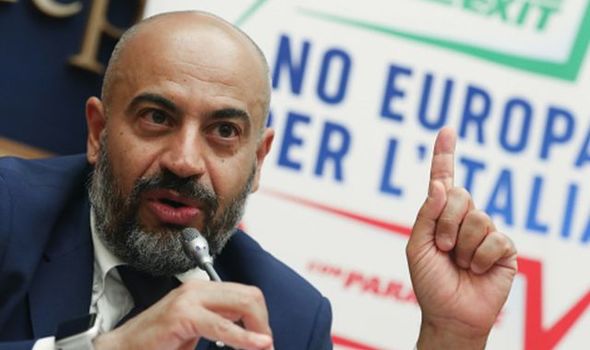 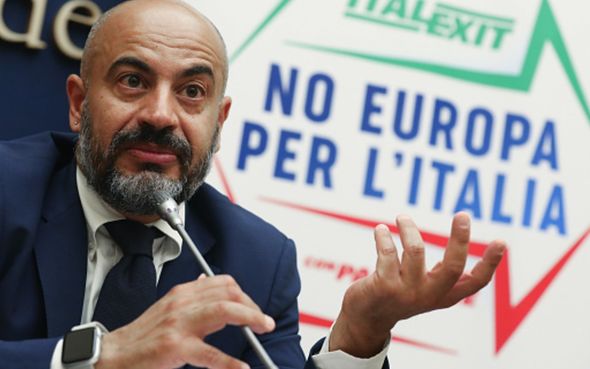 “So I believe that there is great fear in Italy when it comes to Great Britain and the choices it has made.”

Mr Paragone said he believes it is time for Italy to plan new bilateral agreements with third countries across the world to resuscitate its economy as an independent and sovereign nation outside of the bloc.

Asked how he would respond to those who say it is “too late” for Italy to go back to its national currency after the euro, he said: “Too late for which chronometer, for which clock? If the clock is that of history, ‘too late’ is really too relative.

“As for the difficulties that Italy would encounter, today in the European Union we are destined to become increasingly impoverished and we will be exposed to assets that the EU can’t wait to apply.

“On the contrary, I think an Italy that returns to being a fully sovereign country, also and above all from a monetary point of view, has the possibility of engaging with other economies through bilateral agreements.

Brexit: Italy 'will be next to have leave campaign' says Tice

“In an economy that is increasingly made up of relationships, it is better to be alone and safe than to be inside a dynamic such as that of the European Union.”

Italy is now the bookmakers’ favourite to be the next country to quit the European Union as an explosive new report predicted the “possible implosion” of the Eurozone in the wake of the coronavirus pandemic.

A research paper by EconPol Europe suggested Italy and the most vulnerable members of the EU’s single currency bloc face being plunged into “quasi-stagnation” as a result of the lockdown measures to curb the spread of the virus.

Its authors, Luigi Bonatti and Andrea Fracasso, said ailing economies could become “serious risks of contagion” if they are allowed to fail by decision-makers.

They say German Chancellor Angela Merkel’s decision to pave the way for common European debt is only a short-term fix to the financial woes faced by Rome.

Their report states: “The risk that Italy’s fragile financial, economic and political situation, exacerbated by the current crisis, could destabilise the entire Eurozone in the absence of sizeable external assistance was probably one of the main determinants of the German government’s policy shift.

“We argue that, although this shift is sufficient to prevent Italy from plunging into a major financial and political crisis in the short term, thus buying time, it is far from sure that it will be sufficient to drive Italy into a sustainable and satisfactory growth path, so as to avoid that in the longer term it will be in need of further financial support from EU institutions and member states.

“Hence, the latter may again face the dilemma of whether to provide financial assistance to the Eurozone most vulnerable countries, thus making permanent what was supposed to be temporary, or exposing the Eurozone to a possible implosion.”

Italy, the EU’s third-largest economy, is set to receive as much as €209 billion from the bloc’s coronavirus recovery fund.