LAS VEGAS (Reuters) – The top six candidates competing for the Democratic nomination to take on U.S. President Donald Trump in November participated in the ninth presidential debate on Wednesday, with one quickly becoming the focus: Michael Bloomberg.

Bloomberg, the billionaire former New York mayor making his first debate appearance in the race, faced criticism from all his rivals on the stage in Las Vegas:

“We’re running against a billionaire who calls women fat broads and horse-faced lesbians. And no I’m not talking about Donald Trump, I’m talking about Mayor Bloomberg. Democrats are not going to win if we have a nominee who has a history of hiding his tax returns, of harassing women and of supporting racist policies like redlining and stop-and-frisk.”

Warren, a senator from Massachusetts, also criticized Bloomberg for reports that his namesake media company mistreated women employees. She called on him to release women who sued his company from non-disclosure agreements.

“I hope you heard what his defense was: I’ve been nice to some women. That just doesn’t cut it. The mayor has to stand on his record and what we need to know is what’s lurking out there.”

“This is not just a question of the mayor’s character. This is also a question about electability. We are not going to beat Donald Trump with a man who has who knows how many non-disclosure agreements and the drip, drip, drip of stories of women saying they have been harassed and discriminated against.”

“Most Americans don’t see where they fit if they have to choose between a socialist who thinks money is the root of all evil and a billionaire who thinks that money ought to be the root of all power. Let’s put forward somebody who actually lives and works in the middle class neighborhood in an industrial Midwestern city. Let’s put forward somebody who’s actually a Democrat.”

The former vice president assailed Bloomberg over the stop-and-frisk policing policy in New York City that was criticized for ensnaring disproportionate numbers of blacks and Latinos.

“The fact of the matter is he has not managed his city very well when he was there. He didn’t get a whole lot done. He had stop-and-frisk – throwing close to 5 million young black men up against the wall – and when we came along in our administration, President Obama and I said we’re going to send a mediator to stop it, he said that’s unnecessary.”

Biden said that the Obama administration worked to put an end to the policy.

“Let’s get the facts straight. Let’s get the order straight. It’s not whether you apologize or not, it’s the policy. The policy was abhorrent. And it was in fact a violation of every right people have.”

“I actually welcomed Mayor Bloomberg to the stage. I thought that he shouldn’t be hiding behind his TV ads, and so I was all ready for this big day.”

The Minnesota senator then responded to a Bloomberg campaign memo that said the other moderates should drop out to let him fight the liberal Sanders.

“I have been told as a woman, as someone that maybe no one thought was still going to be standing up on this stage, but I am because of pure grit … I’ve been told many times to wait my turn and to step aside, and I’m not going to do that now … I think we need something different than Donald Trump. I don’t think you look at Donald Trump and say we need someone richer in the White House.”

“We are giving a voice to people who would say we are sick and tired of billionaires, like Mr. Bloomberg, seeing huge expansions of their wealth, while a half a million people sleep out on the street tonight … Maybe it’s time for the working class in this country to get a little bit of power in Washington, rather than your billionaire campaign.”

Sanders added later: “Maybe we can talk about a billionaire saying that we should not raise the minimum wage, or that we should cut Social Security, Medicare and Medicaid. If that’s a way to beat Donald Trump, wow, I would be very surprised.”

“I’m a philanthropist who didn’t inherit his money, but made his money. I’m spending that money to get rid of Donald Trump – the worst president we’ve ever had. And if I can get that done, it will be a great contribution to America and to my kids.”

Bloomberg said he had not mistreated women employees but defended his decision not to release those he settled with from non-disclosure agreements, saying they were made “consensually.” 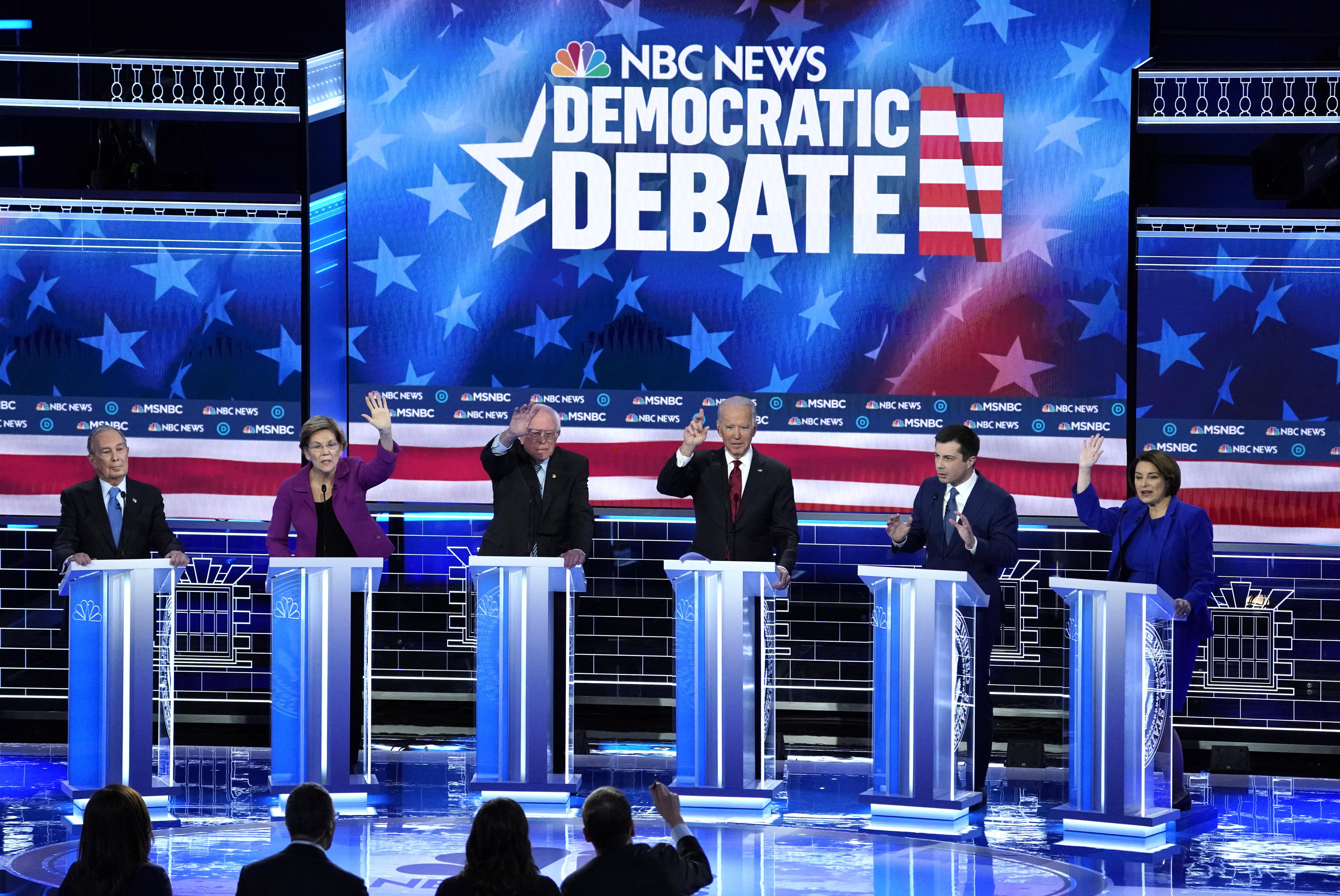 “We have a very few non-disclosure agreements. None of them accuse me of anything … maybe they didn’t like the jokes I told.”

“I can’t think of a better way that would make it easier for Donald Trump to get reelected than listening to this conversation. We’re not gonna throw out capitalism. We tried that, other countries tried that, it was called communism and it just didn’t work.”