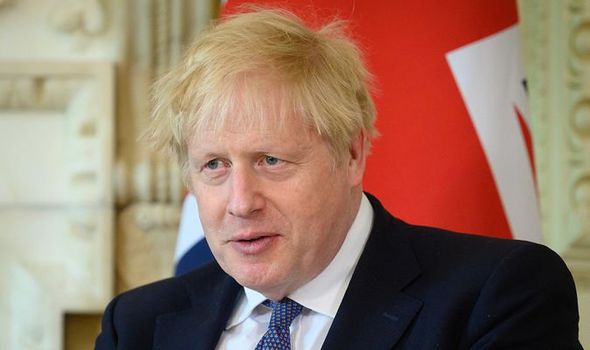 An investigation by Sue Gray into gatherings held in Downing Street is expected to be released as early as Tuesday.

Senior Conservatives said the report will seal the Prime Minister’s fate and he has a 60-40 chance of surviving if he had no instrumental role in the parties.

Mr Johnson will spend the weekend at Chequers and has cleared his diary so he can speak directly to MPs.

Foreign Secretary Liz Truss, tipped as a potential successor, speaking yesterday on an official visit to Australia, insisted the PM has her “100 percent” support.

She said: “He is doing an excellent job. Britain was one of the first countries to roll out the Covid vaccine. We’ve had a very successful booster programme. We’re now able to open up our economy again and we’ve got one of the fastest-growing economies in the G7.

“And the reason we are here in Australia working with our very close partners, is to advance freedom and democracy around the world, and to protect our country.

“I want the Prime Minister to continue as long as possible in his job. He is doing a fantastic job.There is no leadership election.”

A No10 spokesman said: “The Prime Minister said he would make it available to the House and it will obviously be released by the team supporting Sue Gray, I believe in the Cabinet Office.”

A Tory veteran said the mood in the party has changed since Christian Wakeford’s defection to Labour on Wednesday, and MPs were now swinging behind the PM.

“Nobody wants to be associated with a traitor,” they said.

The backbencher said if the report finds Mr Johnson did not have an instrumental role in the parties he has a 60-40 chance of surviving.

They estimated the number of letters of no confidence submitted to party officials was a maximum of 21.

Disgruntled Tory MPs have claimed they faced intimidation and blackmail in an effort to get them to support the PM.

They are said to be considering publishing a secretly recorded conversation with the chief whip – responsible for parliamentary discipline – along with threatening messages, to support their claims.

Mr Wakeford said he was threatened with the loss of funding for a new school in his constituency if he did not toe the line. Tory MP William Wragg, chairman of the Commons Public Administration and Constitutional Affairs Committee, said he had been made aware of allegations that would seem to “constitute blackmail”.

But No10 said an investigation will only be launched “if there was any evidence” to support the claims.

Business Secretary Kwasi Kwarteng disputed the allegations but said if true it would be “completely unacceptable” and ministers “need to get to the bottom of the matter”.

He told Sky News: “As far as the specific allegation about whips withholding funds, I think that’s completely unacceptable.

‘Any form of blackmail and intimidation of that kind simply has no place in British politics’.We need to get to the bottom of the matter. But I find it very unlikely that these allegations are true.”

He added: “I’m sure it will be investigated if it’s not being so already – after 12 years as an MP I’ve never heard anything like this.”

However, he said even though he had not come across this in Parliament, “certainly not to me or to anybody else of that kind, doesn’t mean it’s not true.”

A spokesman for the Prime Minister said: “We’re not aware of any evidence to support what are clearly serious allegations.

“If there was any evidence to support it, it would of course be looked at.”

Mr Kwarteng said of Mr Wakeford, who was elected to Bury South in 2019 on a wafer-thin majority: “I don’t know what his motivations were, and as you’ll appreciate he’s a Labour MP now and, of course, part of his job is to try to discredit the Government.”

“Generally, my whips were a lot shorter than I was over the years,” he told the talk radio station LBC, adding that therefore, “I’m not sure how the physical intimidation or other forms of intimidation” would have been effective.

He said: “I find it a very strange allegation, and I was a whip myself.

“I was a whip for three-and-a-half years, and obviously the whips try to persuade colleagues to support either the Government or the Opposition depending on which side they’re on, but I’ve never come across anything as described like that.”