The controversial legislation overrides key elements of the Brexit Withdrawal Agreement, prompting fury in Brussels. A No 10 spokesman said ministers believed the Salisbury Convention – which states the House of Lords should not vote down legislation to implement government manifesto commitments – should apply to the UK Internal Market Bill. He added: “We would expect the Lords to abide by the Salisbury Convention. 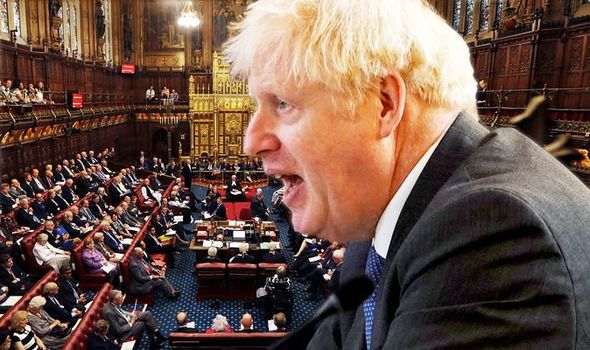 “Guaranteeing the full economic benefit of leaving the EU to all parts of the United Kingdom and ensuring Northern Ireland’s businesses and producers enjoy unfettered access to the rest of the UK were clear Conservative manifesto commitments which this legislation delivers.”

Some peers have warned that the Bill – which passed its second reading in the Commons on Monday – will not get through the upper chamber in its current form.

The warning is likely intended to try and prevent a similar situation to that which dogged Theresa May’s Withdrawal Agreement as she tried unsuccessfully to get it through both Houses.

The Lords’ perceived reluctance to implement Brexit in the wake of the referendum focused attention on the Upper Chamber.

Speaking in 2018, Tory MP Daniel Kawczynski told Express.co.uk: “This is rapidly moving towards a major constitution crisis of unprecedented magnitude.

“In my lifetime I cannot think of anything like it.

“The House of Lords is a elitist chamber which is trying to block the will of the people.

“The time has come for us to start talking about the abolition of the House of Lords and I will start agitating for this.”

A Survation poll undertaken on behalf of the Electoral Reform Society (ERS) indicated just 12 percent of those asked backed the current composition of the House.

By contrast, pollsters found huge support for Lords reform, with 43 percent in favour of it being partially or entirely elected and another 28 percent believing it should be scrapped.

Darren Hughes, Chief Executive of the ERS, said: “The public are clear.

“They are sick to the back teeth of the bare-faced cronyism and political patronage that plagues the unelected House of Lords.”

Addressing the Prime Minister’s decision to appoint a raft of new peers last month, his official spokesman said: “It remains the case that the size of the House of Lords needs addressing, but given retirements and other departures, some new members are needed to ensure the Lords has appropriate expertise and it continues to fulfill its role in scrutinising and revising legislation.”

Mr Johnson nevertheless told the Commons this month  reform of the unelected chamber was in the pipeline.