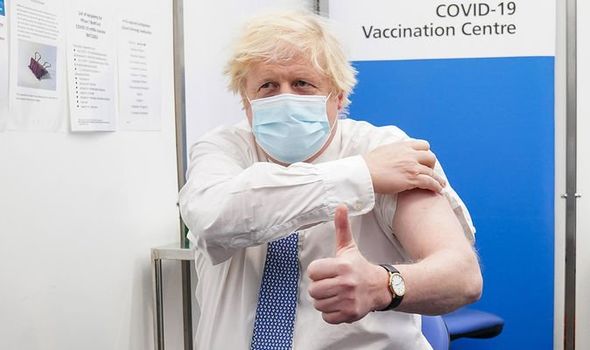 Contradicting his minister, the Prime Minister gave his thumbs-up to Christmas following days of muddled official messaging which led to revellers cancelling parties and festive meals out.

After receiving his vaccine booster at St Thomas’ Hospital in London live on TV, Mr Johnson said: “People should follow the guidance we’ve set out. They shouldn’t be cancelling things, there is no need for that at all and it isn’t what we’re saying.

“We’re taking a balanced and proportionate approach to the risk, but… I believe that Christmas this year will be considerably better than Christmas last year.” Scientists are working to assess the risk of Omicron which sprang up in southern Africa.

Early indications from the World Health Organisation (WHO) suggest most instances are “mild”.

Ten Omicron cases were noted yesterday, seven in England and three in Scotland.

“Whatever Omicron may or may not be able to do, it certainly will not negate the overall value of the boosters so everybody should get your booster.”

The PM, who said he almost died after having Covid last year, revealed that 18.6 million have had a third shot – the highest proportion of any population in Europe.

Mr Johnson has committed to offering all adults a booster dose by January to fend off a fresh spike driven by the super-strain.

Four hundred soldiers have been deployed to help with the rollout at vaccine centres. Some 46.4 million people have had two jabs, which is 69 percent of the population.

Mr Johnson’s intervention came after days when ministers and public health officials delivered varying thoughts on what Christmas might look like this year.

The science minister George Freeman said earlier yesterday his parliamentary team decided it was “probably sensible” to hold its Christmas party online “and wait for the spring. It won’t be the best party in the world”.

He also suggested that holding a party in person might depend on how many people are attending.

Jacob Rees-Mogg, Leader of the House of Commons, encouraged schools to press ahead with nativity plays this year.

But Cabinet minister Therese Coffey said on Wednesday she did not think there ought to be “much snogging under the mistletoe”.

Health Secretary Sajid Javid, who said he would take a Covid test before parties, revealed it was a “family tradition” to kiss his wife under the mistletoe: “People can snog who they wish… it’s got nothing to do with the Government.”

He urged revellers to be “cautious” but Dr Jenny Harries, head of the Health Security Agency, warned people not to socialise if they did not need to.

She added: “If we all decrease our social contacts a little bit, actually that helps to keep the variant at bay,” she told the BBC.

After Omicron was found, ministers Government reintroduced masks in shops and on transport in England and tightened isolation rules and travel curbs.

No 10 aides yesterday denied there was confusion over guidance – but hospitality firms accused the Government of being “inconsistent”.

The boss of pub group Young’s, which runs more than 270 sites, confirmed his business has had parties cancelled due to concerns over Omicron. Patrick Dardis, Young’s chief executive, said: “I think the messaging has been terribly confusing and inconsistent.

“One moment you have Jenny Harries telling people to avoid socialising and an hour later you have Sajid Javid saying the opposite.”

He added: “I think the messaging started as a complete over-reaction and, unsurprisingly, it has concerned some people.”

Three of the sector’s leading trade groups UKHospitality, the British Institute of Innkeeping and the British Beer & Pub Association have urged people with festive plans “not to cancel”.

Bookings are already down on previous years.

Their joint statement added: “The full range of hospitality venues across the UK would usually be experiencing their annual bookings bonanza at this time of year, but it hadn’t materialised even before Omicron was first detected.”

Dr Maria Van Kerkhove, WHO Covid-19 technical lead, said there have been reports of Omicron cases which “go from mild disease all the way to severe disease”, but stressed it is still early days.

Carol Popplestone, chairwoman of the Royal College of Nursing Council, said infections had been on the rise before the variant was discovered. She said “mixed messages” from ministers over Christmas plans might create “even more worry and confusion”.

Meanwhile, one scientist assessing vaccines said his group is ready to move “very quickly” on deciding if children aged five to 12 should be given a Covid jab.

Prof Adam Finn, of the Joint Committee on Vaccination and Immunisation, said it is awaiting safety approval from the Medicines and Healthcare products Regulatory Agency on the Pfizer/BioNTech vaccine.

The vaccination has been approved for youngsters in the EU and US already.

Meanwhile, Mr Javid revealed contracts for the Government to buy 114 million Pfizer/BioNTech and Moderna doses for potential use next year and in 2023.

We all want to see the return of the freedom to meet, socialise and go about our normal business. However, freedom cannot be achieved by putting other people at risk.

Nations whose populations have been particularly well-disciplined in terms of masks and distancing have fared the best in terms of infection rates.

These are countries in which wearing a mask has not been politicised, and neither has the idea of Covid as a restriction upon personal freedoms.

Abundant evidence shows that the association of large numbers spreads the disease and lengthens the time it will take to get it under control.

The excess death toll caused by Covid in the UK is still about 1,200 people a week. Infection rates are high. This is no laughing matter.

No doubt there will be a burst of exuberance when we can finally show the virus the door. But for now we need to show a strong, continued sense of responsibility.

Christmas parties at work, while enjoyable, are not vital and we should think carefully about ways to minimise risks when meeting others too, such as keeping numbers low and meeting in ventilated spaces.

Once the risks are low enough, we can get together and celebrate. Sadly, that is not the case this Christmas.

Meanwhile, we should behave with prudence, regardless of whether our leaders show the right example.