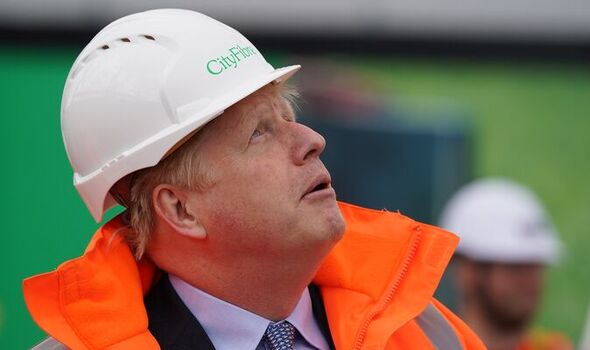 The Prime Minister insisted the Government’s bumper giveaway means the UK will be in a “much, much stronger position” as pressure on global prices eases. And he suggested the measures could help stave off a recession.

But Mr Johnson admitted the ­rescue funds, partly funded by a windfall tax on energy companies, would not “fix everything for everybody immediately”.

All households will see £400 cut from energy bills while the poorest eight million will receive lump sum payments of £650. Some struggling families may qualify for up to £1,200.

It beefs up support announced ­earlier in the year including a £150 discount for most council tax bills. Speaking at a training academy in Stockton-on-Tees, Co Durham, the PM said: “It’s ­a very, very ­substantial commitment to get us through a bumpy time with the increase in energy prices around the world.”

Mr Johnson added that the measures will “get us through until prices start to abate and we’ll be ­in a stronger position”.

The support package that he described as “a big bazooka” was unveiled on Thursday by Chancellor Rishi Sunak.

It will see pensioners get a top-up to the annual £200-£300 winter fuel payment in November and six million people who receive disability benefits will be given a one-off payment of £150 in September.

It comes at a time when soaring energy prices have pushed inflation to a 40-year high of nine per cent and with regulator Ofgem warning gas and electricity bills are set to go up by a further £800 in the autumn.

The Prime Minister played down the risk that the support package could stimulate further inflation.

He said: “We’ve looked at that very carefully and the answer is no because I don’t think that it will lead to more discretionary spending simply because people’s outgoings are going to go up and have been already as a result of increased costs of energy and food.”

Asked in a Bloomberg interview if the economy was heading for a ­recession, Mr Johnson was defiant, saying “not necessarily at all”.

Meanwhile, despite using significant financial muscle, the Chancellor opened the door to more spending to ease pressures further down the line.

Asked if he is prepared to return with another emergency package next year even if it requires more borrowing and taxes, Mr Sunak said: “People can judge me by how I’ve acted over the last couple of years.

“I’ve always been prepared to respond to the situation on the ground, what’s happening to the economy, what families are experiencing and making sure we’ve got policies in place to support them.

“In terms of ‘is it a one-off?’ I want people to be reassured and confident that we will get through this.

“We will be able to tackle and reduce inflation, we have the tools, and after time it will come down.”

The plan to fund ­the giveaway with a £5billion windfall levy on oil and gas companies was criticised by some Cabinet ministers who fear it can damage long-term investment in the UK.

Companies such as BP and Shell will face an additional 25 per cent tax on profits until December 2025 unless they use money to invest in new North Sea exploration projects.

The Chancellor is also planning to extend the tax to include the profits made by electricity generators, which could bring in a further £4billion.

Labour shadow chancellor Rachel Reeves said the Government had “finally come to its senses” over the windfall tax but said ministers needed to ensure they were not in the same position next year.