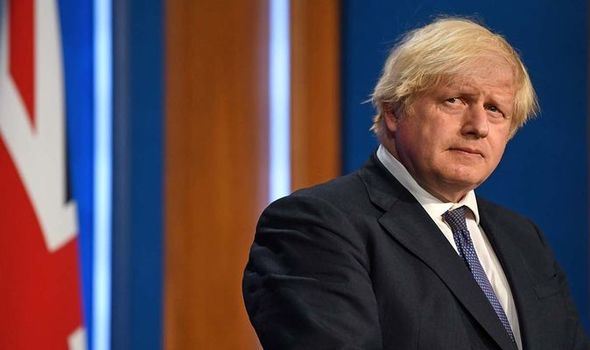 As Army drivers take to the roads today to start delivering petrol to pumps across the country, the Prime Minister insisted supply problems on forecourts were “abating”. But he argued drafting in cheaper workers from overseas to fill job vacancies was the wrong solution.

Mr Johnson said the UK was facing “stresses and strains” as it moved away from the “broken model” that saw voters back Brexit.

He said the economy faced a “period of adjustment” and the way to get more HGV drivers was for the industry to ensure they were “decently paid” and have good conditions.

He said: “We have got to make sure people come on stream as fast as we practically can.

“The way forward is not to just pull the big lever marked uncontrolled immigration and allow in huge numbers of people.”

Mr Johnson, right, said the Government would support industries that are having difficulties but warned it was “fundamentally up to them to work out the way ahead”.

He added: “In the end, those businesses, those industries, are the best solvers of their own supply chain issues – government can’t step in and fix every bit of the supply chain.”

The Government has agreed to 10,000 short-term visas for hauliers and food production workers to help ease supply issues.

Mr Johnson said “controlled immigration” would ease pressure but stressed he would not allow the country to return to a “low skilled, low wage economy”.

A shortage in abattoir workers has led to fears around 120,000 pigs will be incinerated in the next 10 days.

But Mr Johnson said the problem was caused by a “shortage of another particular type of workforce”.

He refused to rule out supply chain disruption in the run-up to Christmas, insisting the festive period will be “considerably better” than last year.

Around 100 trained Army drivers with 100 support troops are due to be deployed over the coming week to help ease petrol pump shortages.

London and the South East have continued to see long queues.

Brian Madderson, chairman of the Petrol Retailers’ Association, said: “It’s really to do with the population, we have 25 million-plus in and around London and the home counties.”