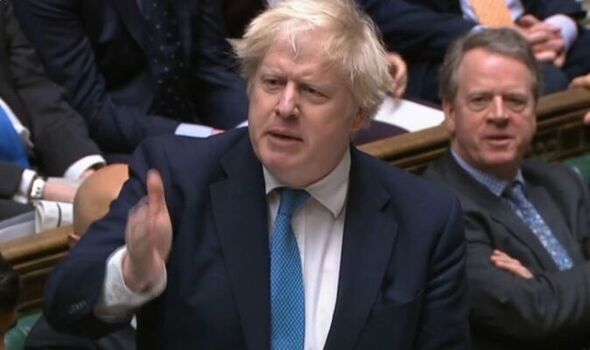 Extra shipments of “lethal aid”, thought to include defensive light armour weapon systems to counter tanks, are being rushed to Kiev. Mr Johnson said the Government was ready to “escalate our sanctions very rapidly” to tighten the financial squeeze on Russia.

Brushing aside criticism that the British response has been inadequate, he insisted measures to target oligarchs and Russian businesses were ready to be triggered. He signalled his support package for Ukraine at the start of Prime Minister’s Questions.

He said: “I can announce to the House that in the light of the increasingly threatening behaviour from Russia, and in line with our previous support, the UK will shortly be providing a further package of military support to Ukraine.

“This will include lethal aid in the form of defensive weapons and non-lethal aid.”

Downing Street officials declined to release details of the military equipment being sent for “security reasons”. But the move follows supplies of light anti-tank weapons dispatched by the Ministry of Defence to capital Kiev last month.

Crosshead country worth up to £370million. She said Britain is putting its money where its mouth is by injecting vital capital into Ukraine as it faces economic uncertainty.

Referring to the UK Government’s sanctions, she added: “This is about inflicting pain on Putin and degrading the Russian economic system over time.

“My view is that he wants to invade, this is a long-standing plan. And what we have to do is make it as painful as possible.” Mr Johnson faced more pressure from Labour and some of his own backbenchers to drastically increase his sanctions package on Russia. It focused on freezing the UK assets of five Russian banks and three oligarchs.

Labour leader Sir Keir Starmer pressed the Prime Minister to impose more sanctions on Russia because there had “already been an invasion.” He added: “There is clearly concern across the House that his strategy, I accept unintentionally, could send the wrong message.”

He called for extra measures including banning Russians from using international financial telecommunications and outlawing the trading of Russian sovereign debt.

Mr Johnson replied: “What we want to see is de-escalation by Vladimir Putin. There is still hope that he will see sense, but we are ready very rapidly to escalate our sanctions as I have set out.”