Boris Johnson stunned the House of Commons on Wednesday as he left the room as Theresa May delivered her speech to the House on the impending lockdown Mrs May claimed she did not envy the Government and the difficult decision they have had to make during the coronavirus pandemic. As Mr Johnson got up to leave the House Mrs May paused and raised her hands in indifference and continued with her speech.

Murmurs could be heard from the shocked MPs before quietening so the former Prime Minister could speak on the current strategy being used by the Government to deal with coronavirus.

She said: “Can I, first of all, say to my right honourable friend that I don’t envy him and the Government and the decisions they are having to take and the difficult position they find themselves in.

“This pandemic has challenged Governments across the world and Ministers have been under relentless pressure in dealing with this issue.

“Just as Ministers are making tough decisions, so are Parliament. 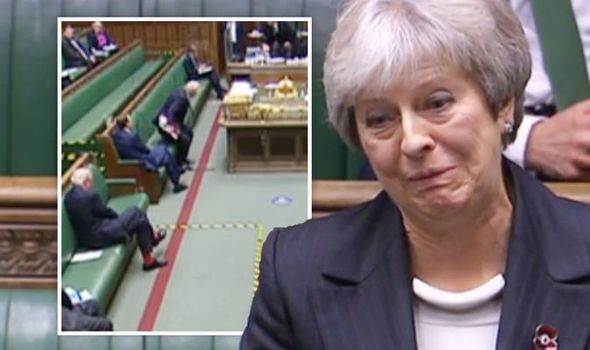 “Parliament will make better decisions if it is fully and properly informed.”

Mrs May also claimed she had looked at the idea of a circuit breaker to combat the virus in September.

She argued that the circuit breaker strategy may have needed to been repeated over and over again and would not just last two weeks.

She said: “I looked at the SAGE paper of the 21st of September and what was absolutely clear was that this was not a two to three week circuit breaker, full stop end of story.

“I doubt if any economy could have bourn the irreparable damage that would have done with the impact on lives of which would have been significant.”