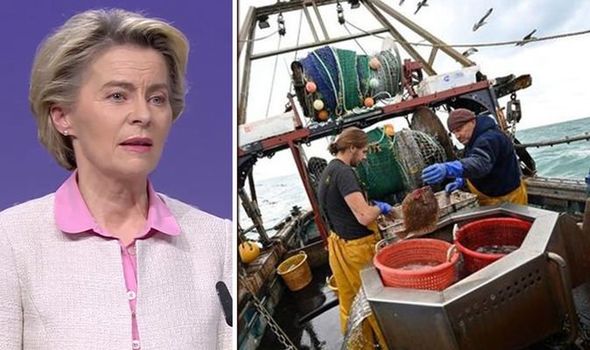 EU fishing access in British waters has been a major stumbling block in negotiations, and this continued to be the case right up until the trade deal was signed.

The UK clinched a post-Brexit trade deal with the EU earlier on Thursday, just seven days before it fully leaves on of the world’s biggest trading blocs at the end of the tyransition period on December 31.

Prime Minister Boris Johnson and European Commission President Ursula von der Leyen have remained in close contact over recent days in order to help get the agreement over the lines.

Trade talks between the EU’s chief Brexit negotiator Michel Barnier and the UK’s Lord Frost continued throughout Christmas Eve as the final details were confirmed.

Speaking at a press conference, Ms von der Leyen said: “First of all, competition in our single market will be fair and remain so.

“The EU rules and standards will be respected. We have effective tools to react if fair competition is distorted and impacts our trade.

“Secondly, we will continue cooperating with the UK in all areas of mutual interest, for example in the field of climate change, energy, security and transport.

“Together, we still achieve more than we do apart.

“And thirdly we have secured five and a half years of predictability for our fishing communities.”

Mr Barnier also told the press conference: “We have achieved reciprocal access to waters and to resources, and with the new distribution of fishing quotas and fishing opportunities which has been directly agreed, as is only natural, between the president of the European Commission Ursula von der Leyen and Prime Minister Johnson, with taking account of Britain’s new status as an independent coastal state, that is a state which will no longer be part of the common fisheries policy just a few days from now.

“This agreement will require efforts.

“I know the European Union will support its fishermen and women, will accompany them, and that is our commitment.”

Ms von der Leyen had earlier tweeted: “It was worth fighting for this deal.

“We now have a fair & balanced agreement with the UK.

“It will protect our EU interests, ensure fair competition & provide predictability for our fishing communities.

“Europe is now moving on. “

A Downing Street source had earlier said: “Deal is done. “We have taken back control of our money, borders, laws, trade and our fishing waters.”

“The deal is fantastic news for families and businesses in every part of the UK. We have signed the first free trade agreement based on zero tariffs and zero quotas that has ever been achieved with the EU.”

“We have delivered this great deal for the entire United Kingdom in record time, and under extremely challenging conditions, which protects the integrity of our internal market and Northern Ireland’s place within it.”