UK and EU leaders might not yet be able to agree on a trade deal, but one Brexit issue they can agree on is their fondness for cake metaphors.

French President Emmanuel Macron became the latest leader to serve a slice of analogy on Friday when asked about the EU’s contingency planning.

In the event of a no-deal outcome from Brexit trade talks, Brussels has proposed a series of short-term mini-deals with the UK to keep planes flying, lorries moving and allow fishing boats to carry on working. 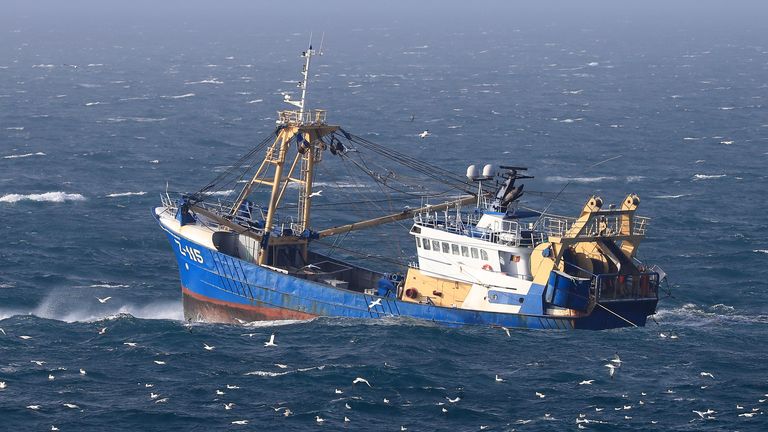 However, this has risked provoking a fresh fishing row with Britain over plans for EU boats to continue working in UK waters, on a reciprocal basis, for up to a year.

Some Brexiteers have viewed the fishing demand as an attempt at “blackmail”, with the EU – in return for continued access to UK waters – not grounding UK flights or stalling British hauliers from 1 January after a no-deal outcome.

Meanwhile, parts of the mini-deals offered by the EU to the UK contain the same demands for so-called level playing field provisions that have – along with fishing rights – been such a contentious aspect of post-Brexit trade negotiations.

Subscribe to the All Out Politics podcast on Apple Podcasts, Google Podcasts, Spotify, Spreaker

Asked after an EU summit on Friday whether the bloc’s one-year fishing proposal was akin to “having your cake and eating it”, Mr Macron replied: “I’m not asking to have my cake and eat it, no.

“All I want is a cake that’s worth its weight. Because I won’t give up my share of it either.”

The French president is under domestic pressure to preserve access to UK waters for his country’s fishing fleets during ongoing Brexit negotiations.

The use of cake metaphor over Brexit issues has been a regular occurrence over the last four years, with the UK often accused of wanting to “have its cake” – by leaving the EU – and “eating it” – by continuing to enjoy the same benefits of EU membership.

Prime Minister Boris Johnson once famously said his “policy on cake is pro having it and pro eating it.”