The EU has now demanded fishing quotas be reviewed after ten years which will be tied to the overall agreement. This means the two sides could be set to clash over quotes in 2030 if Mr Barnier gets his wish. The UK had pushed for annual negotiations on fishing quotas like it has in place with Norway, now Britain is an independent coastal nation.

Ahead of any potential deal, civil servants in Whitehall are now preparing legislation in order for a deal to pass through the Commons and Lords as quickly as possible.

One source told The Times: “There’s increasing expectation of a deal. We need to be ready to get it through parliament.”

Talks concluded this week with the two sides still failing to agree on a deal.

EU officials did admit some slight progress had been made during the week’s discussion with the majority of the key issues having accompanying legal texts.

However, issues still remain between the two sides, namely on the level playing field, fisheries and the dispute mechanism. 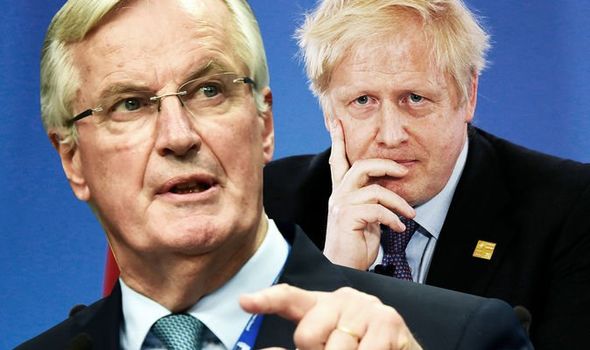 If a deal is agreed between the two sides, it will also need to be ratified by EU officials in Brussels.

Ahead of any potential breakthrough, the EU’s co-ordination team has drawn up plans to adjust the ratification process before the end of the year.

Due to the broad and complicated nature of the agreement, it is expected the deal we need to be ratified by MEPs in the EU Parliament and national governments.

Ahead of next week’s talks, Mr Barnier has demanded fishing quotas be negotiated on a 10-year basis, according to The Times.

This is in contrast to the UK’s pursuit of annual negotiations on access and quotas now Britain is an independent coastal nation.

Both Mr Barnier and Lord Frost will hold talks virtually after an EU official tested positive for coronavirus last week.

Although some progress has been made, gaps still remain between the two sides with the Brussels now running out of time to ratify any deal.