Brexiteer Jayne Adye delivered her stark message for the Prime Minister during her weekly bulletin for the Get Britain Out campaign, of which she is director. Financial services is one key area where the relationship between the EU and the UK have yet to be finalised – and Ms Adye told Mr Johnson he could not afford any weakness.

She said: “The EU – and specifically French fishing vessels – rely almost entirely on securing their catch in the United Kingdom’s waters – to the detriment of our own fishermen all around our own coast who are suffering.

“The UK should hold all the leverage in these negotiations. It’s time the Government actually put it to good use.

“What is the point of this deal we have signed up to, which so clearly benefits the EU far more than it benefits the UK?

“Surely if we cannot secure a preferential deal for our biggest industry – Financial Services, as well as including a deal which would help our own fishermen – then why are we allowing the EU easy access to our markets and our waters?” 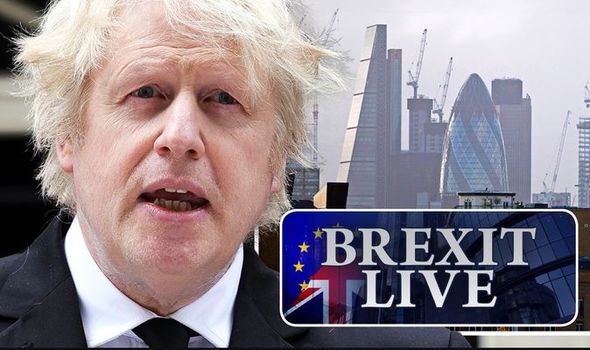 In a message for the Prime Minister, she added: “One thing Boris Johnson cannot do however, is continue to pretend Brexit is over and done with – as the PM seems to be doing at the moment.

“If the UK let’s its guard down, we will pay the price in the future.

“The EU is clearly aware a truly independent United Kingdom – which is able to freely engage with the whole world – is a critical threat to its ongoing vision of an ever-closer federal union.

“Boris must not allow the European Union to continue to ride roughshod over our global future, or he will pay for it at the next General Election, if not before!”

[SCROLL DOWN FOR REGULAR UPDATES]

7.17am update: EU economy shaken ‘to the core’ but Brussels chief says ‘more Europe’ is only solution

The coronavirus pandemic shook the EU’s economy “to the core” according to David Sassoli, President of the European Parliament and a leading Eurocrat.

Much of Europe is battling a third coronavirus wave aided by the EU’s slugging vaccine rollout.

However, he controversially argued the EU’s coronavirus response has been a success and called for “more Europe” to confront future challenges.

Britain will be made into a scapegoat for the European Union’s failings for years to come, an MEP has warned.

German MEP Gunnar Beck said jealous eurocrats would attempt to pin the blame on the UK for the bloc vaccine shambles and slow economic recovery after the pandemic.

And he warned if Brussels refuses to cool tensions with Britain other countries could soon quit the EU.

He said: “If we assume that the recovery won’t be as rapid and dramatic as many had hoped, then the EU will be looking for scapegoats because its not in the habit of acknowledging mistakes, especially Ursula von der Leyen.”