Downing Street this week laughed off EU plans, which would have handed British fishermen a boost of up to 18 percent of catch quotas in our waters, before it even landed in London. Brexit negotiations have been deadlocked for months over the issue of fishing rights with talks coming down to the wire ahead of the transition deadline of December 31.

But the UK failed to bow to pressure despite the EU’s chief negotiator climbdown, warning Brussels would have to move further before an agreement is possible.

Mr Barnier travelled to London on Friday in a last-ditch attempt to avoid a tumultuous finale to Brexit talks, where in-person negotiations with Lord David Frost will resume in the city today.

Time is tight to secure a free trade deal between the two sides, with the transition period set to end in just over a month. 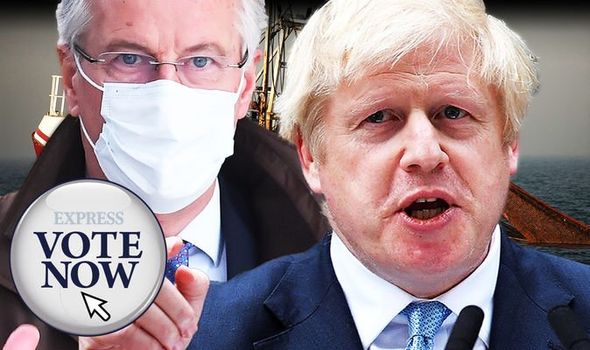 With just five weeks left until the UK finally exits the EU’s orbit on December 31, both sides are calling on the other to compromise on the three main issues of contention – fishing, state aid and how to resolve any future disputes.

Under the EU’s fishing plan, British fishermen would have seen an increase of their catch quotas between 15 and 18 percent for certain species.

But a UK source close to the talks said the climbdown wasn’t enough, telling Express.co.uk: “It’s derisory, there’s nothing more to say about it”.

The offer has been on the table for at least three weeks, and has been unable to provide a breakthrough.

The Prime Minister’s spokesman said: “Our negotiating principle remains that we will become an independent coastal state and we will retain control of our fisheries.

“The talks will resume over the weekend on a face to face basis. We remain committed to seeking a free-trade agreement but that must fully respect UK sovereignty.

“At this late stage, a deal is still possible and we are working to achieve one. We’ll continue to negotiate over the weekend to that end.”Lord Frost called on Brussels on Friday to respect UK sovereignty.

Writing on Twitter on Friday, he said that while it was “late” to reach a deal an agreement was still “possible”.

He added: “Some people are asking me why we are still talking. My answer is that it’s my job to do my utmost to see if the conditions for a deal exist. It is late, but a deal is still possible, and I will continue to talk until it’s clear that it isn’t.

“But for a deal to be possible it must fully respect UK sovereignty. That is not just a word – it has practical consequences. That includes: controlling our borders; deciding ourselves on a robust and principled subsidy control system; and controlling our fishing waters.

“We look to reach an agreement on this basis, allowing the new beginning to our relationship with the EU which, for our part, we have always wanted.

“We will continue to work hard to get it – because an agreement on any other basis is not possible.”

Britain formally left the EU on January 31 but has been in a transition period since then under which rules on trade, travel and business remain unchanged. From the start of 2021 it will be treated by Brussels as a third country.

One EU diplomat said there are “only a few days left” for the talks, which have previously continued through numerous broken deadlines.

They added: ”The gaps on level playing-field, governance and fisheries remain large.

“Without London taking the necessary decisions quickly, reaching a deal will be all but impossible.”