The “Butcher of Bosnia” is being transferred from the Netherlands, where he has been held since his conviction in 2016 for genocide and crimes against humanity. Britain will cover the cost of the prison bill for the 75-year-old. Foreign Secretary Dominic Raab said: “Karadzic was convicted and found guilty of the genocide at Srebrenica, the darkest moment in European history since the Holocaust.”

Mr Raab helped to create the international process that eventually brought the Bosnian Serb leader to justice while he worked as Foreign Office lawyer in the Hague.

Mr Raab said: “I remember back in 2004 wondering whether we would ever be able to implement it and hold it properly to account, and bring to justice this kind of high-level leader.

“So I take some solace in the fact that we can today. But most importantly, we are giving the victims of these appalling crimes a measure of justice at long last.” 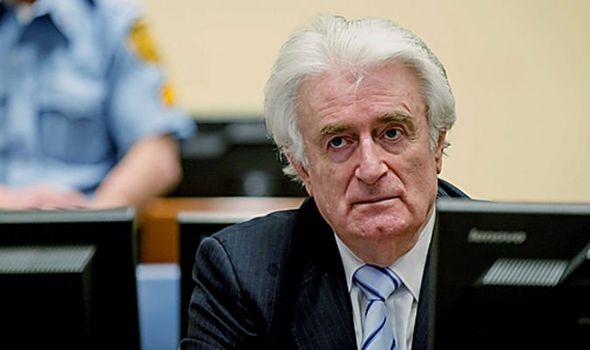 Karadzic has been held in a UN detention centre since he was sentenced by the International Criminal Tribunal for the former Yugoslavia in The Hague to serve 40 years. The term was later increased to life.

He was held responsible for the 1995 massacre of more than 7,000 Bosnian Muslim men and boys at Srebrenica, Bosnia.

Karadzic evaded justice for more than a decade but was finally arrested in 2008. He had been masquerading as a doctor of alternative medicine under an assumed name. British
special forces helped track him down in Belgrade and UK lawyers were involved in securing a conviction.

Government sources said the date of his arrival and the prison where he will be held will not be released for security reasons.

The insider said the UK was willing to take Karadzic but “we want the world to see that the UK enforces international justice”.