On Tuesday, and not for the first time, Joseph R. Biden Jr. described President Trump’s reluctant attitude toward wearing masks as “macho.”

Tomi Lahren, a conservative commentator and Fox Nation host, countered that Mr. Biden “might as well carry a purse with that mask.”

They were among the most direct comments yet that have tied stereotypes about acting and appearing manly to the basic precautions that doctors, epidemiologists and other health experts recommend to prevent infection by the highly contagious and deadly coronavirus.

The theme has been there since the beginning of the pandemic. Some experts who study masculinity and public health say the perception that wearing masks and following social distancing guidelines are unmanly has carried a destructive cost. The virus has infected more men than women and killed far more of them. 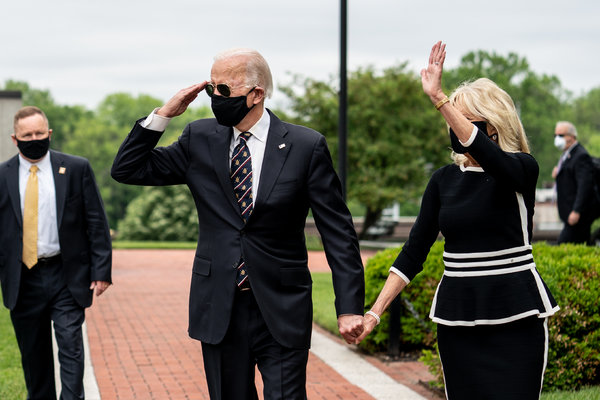 The experts say the best public health practices have collided with several of the social demands men in many cultures are pressured to follow to assert their masculinity: displaying strength instead of weakness, showing a willingness to take risks, hiding their fear, appearing to be in control.

Men’s resistance to showing weakness — and their tendency to take risks — was demonstrated by scientists long before Covid-19. Studies have shown men are less likely than women to wear seatbelts and helmets, or to get flu shots. They’re more likely to speed or drive drunk. They are less likely to seek out medical care.

Some initial research indicates a similar pattern is playing out with the coronavirus. Surveys have found that women are more likely than men to wear masks in the United States. And recent polls have found men give higher marks to President Trump than women on his handling of the pandemic.

“To admit you’re threatened is to appear weak, so you have to have this bravado,” said Peter Glick, a professor of social sciences at Lawrence University. If you wear a mask, he said, “the underlying message is: ‘I’m afraid of catching this disease.’”

Mr. Trump tends to reject anything that can be read as a sign of weakness or lack of control. His behavior and comments after his own hospitalization, amid a widening outbreak within his circle, have also exposed a White House that flouted the basic precautions endorsed by its own health experts.

And many American men who look up to Mr. Trump are taking his cues, choosing to forgo protective measures that health officials say are crucial to slowing the spread of the virus.

This is not a new problem for those who work in public health messaging. Stacey Hust, an associate professor of communication at Washington State University, said prevention campaigns around sexual assault often try to appeal to masculine ideals, making better behaviors “worthy of the alpha male.”

It tends to be more difficult to reach those who identify strongly with traditional masculine characteristics. As an example, the more someone identifies with those masculine traits, the less likely that person will be to use condoms during sex, she said.

Mr. Biden, who has modeled wearing masks and adhering to social distancing guidelines, has consistently criticized Mr. Trump for his approach to his personal coronavirus precautions. In May, he called Mr. Trump “falsely masculine” for his refusal to wear a mask, and said the precaution connoted leadership, not weakness.

At first, Mr. Trump would not wear a mask in public. On very rare occasions he has been photographed in one, but has continued to play down their effectiveness.

He has mocked Mr. Biden for his mask use, and made a show of removing his mask while on a White House balcony when he returned from Walter Reed National Military Medical Center on Monday. He has also continued to host large campaign rallies and other events that don’t follow recommended social distancing guidelines.

Theresa Vescio, a professor of psychology and women’s, gender and sexuality studies at Penn State University, said Mr. Trump has frequently engaged in “masculinity contests” as a president and candidate.

He has demeaned male rivals — repeatedly referring to former Mayor Michael R. Bloomberg as “Mini Mike,” for one — and in the 2016 Republican primary defended the size of his penis after an attack by Senator Marco Rubio.

And Republicans have successfully staked ground as the party for men who take their masculinity seriously. In research with Nathaniel Schermerhorn, a graduate student at Penn State, Professor Vescio has found that the degree to which someone endorses traditional masculine ideals — including women who value traditionally masculine men — very strongly correlates with identifying as a Republican. Polls show Mr. Trump attracts more support from men than from women.

“Republicans have been doing this since 2016, effectively feminizing or suggesting Democrats have masculine shortcomings,” she said.

Many of Mr. Trump’s supporters admire his aggressive style, Professor Glick said, and see him as a model of male dominance.

It was a lost opportunity early in the pandemic. The president could have used that authority to change the perception of masks and other precautions among those who value traditional masculine traits, he said.

“It certainly would have helped,” Professor Glick said. “But at this point, it’s hard to go back.”

President Trump said he was “medication free” and planning to host up to 2,000 people at the White House. Next week’s debate was canceled. Read live updates.

Many rules have changed during the pandemic, making it harder to figure out how to cast your ballot. This interactive guide can help you ensure your vote is counted.

Keep Up With Our Coverage

Get an email recapping the day’s news