All travel corridors will close from Monday, meaning everyone arriving in the UK will have to self-isolate.

The tighter border restrictions unveiled by Boris Johnson are aimed at protecting the progress made with the rollout of vaccines in the face of new coronavirus variants being found around the world.

It had already been announced everyone travelling to the UK from Monday will need to have proof of a negative COVID-19 test. 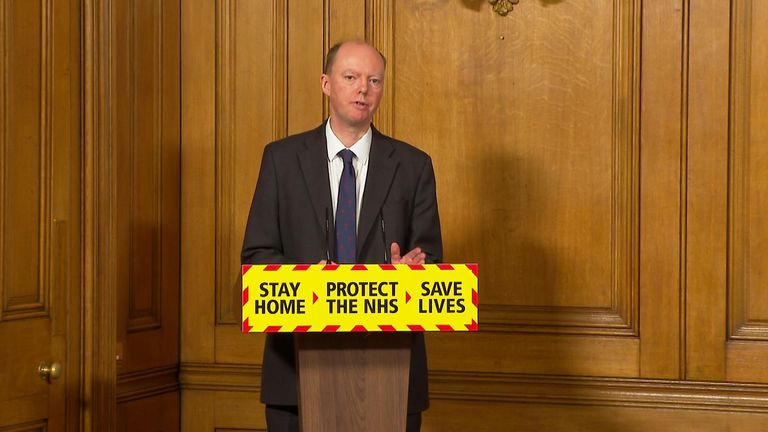 Under the travel crackdown, ending the quarantine exemption for arrivals from certain countries, people will also have to immediately self-isolate on arrival for 10 days, unless they have a negative test after five days.

This will be backed by more spot checks to ensure people are remaining in self-isolation.

The new regime will be in place until at least 15 February while further work takes place on how to manage the threat posed by mutations of the virus.

The government has also said it will continue to impose flight bans from countries where new strains are formally identified.

It came as it was revealed the UK had now vaccinated more than 3.2 million people – nearly one in 20.

Almost 45% of over-80s had received the jab and nearly 40% of care home residents.

However, Mr Johnson warned that “it would be fatal if this sense of progress were now to breed any kind of complacency because the pressures on our NHS are extraordinary”.

With 55,761 positive cases since Thursday and 1,280 deaths, it was “not the time for the slightest relaxation of our national resolve and our individual efforts,” he said.

The prime minister told the Downing Street news briefing: “It’s precisely because we have the hope of that vaccine and the risk of new strains coming from overseas that we must take additional steps now to stop those strains from entering the country.

“Yesterday we announced that we’re banning flights from South America and Portugal and to protect us against the risk from as-yet-unidentified strains we will also temporarily close all travel corridors from 4am on Monday.”

Pressed over why the border controls were only being introduced now, Mr Johnson said: “What we’re doing now is taking steps that you’d expect to protect against the new variants because the situation now is we have a very high rate of domestic infection in the UK combined with a massive vaccination programme.”

Mr Johnson added: “At this crucial stage what we can’t have is new variants with unknown qualities coming in from abroad and that’s why we’ve set up the system to stop arrivals from places where there are new variants of concern and set up the extra tough measures that I’ve outlined.”

Labour leader Sir Keir Starmer welcomed the decision to suspend travel corridors but criticised the government for being slow to act.

“I think many people will say ‘Why on earth didn’t this happen before?’ Many countries have taken this step before we did. Right step, but slow again,” he said.

Tim Alderslade, chief executive of trade body Airlines UK, said travel corridors were a “lifeline” for the travel industry when they were introduced in summer 2020.

He acknowledged that “things change” and it is the correct decision to remove them, but added restrictions should be eased again “when it is safe to do so”.