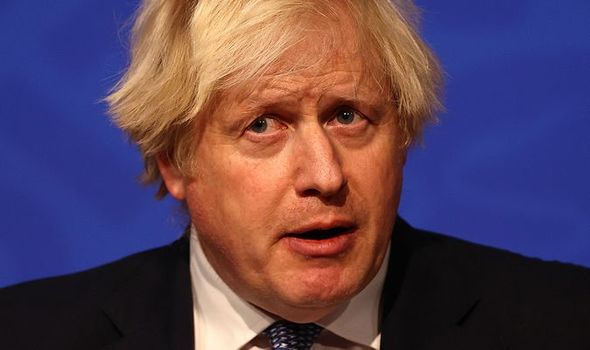 Their 20-month-old son Wilfred was carried into the car by Carrie’s best friend Nimco Ali.

The visit was most likely a welcome distraction for Mr Johnson, coming as it did on the back of potentially damaging remarks made by Mr Cummings.

The shamed former aide claimed there were photos of the “parties” held in No10 in the run-up to last Christmas.

It has also emerged that the PM’s top communications adviser Jack Doyle handed out jokey awards to staff at a gathering on December 18.

Mr Doyle offered to resign yesterday but the Prime Minister did not accept it and gave his backing to the £140,000-a-year communications chief.

Cabinet Secretary Simon Case is now investigating the alleged party and others.

They include a Downing Street gathering on December 27 and another at the Department for Education on December 10.

The inquiry could be widened if there are credible allegations about other events.

Yesterday Mr Cummings claimed Mr Johnson was “lying” about the gatherings and said photo evidence of the events – as well as invitations sent to people who do not work at No10 – would soon be revealed.

He tweeted: “There’s lots of pictures of the parties which will inevitably get out. And invite lists beyond No10 to other departments.”

In a question-and-answer event on his blog, Mr Cummings also suggested that Mr Doyle would become the fall guy for the party scandal – claiming the press chief is a “gonner”.

He said the PM “will be thinking, ‘Not now, gotta keep him as the sacrifice for Case’s inquiry then – I’m shocked, shocked I tell you, to discover there was a party and I was misled.'” Referring to the events of December 18, Mr Cummings also suggested Mr Johnson may have known about the gathering.

“He knew but I think did not attend, though to get upstairs he has to walk past that area where he could see it – if he was not at Chequers.”

The December 18 gathering, allegedly involving 20 to 30 people, took place two days after London had gone into Tier 3 lockdown restrictions, meaning people could not mix indoors with anyone outside their household or support bubble.

No10 has refused to explain how this “party” complied with the rules in place at the time.

Meanwhile, Downing Street confirmed it had cancelled plans to hold a Christmas party this year. The PM’s spokesman said: “I think we’ve made clear since the latest situation with Omicron, obviously that’s taking up great deal of time at the moment, there’s no plans for that in No10.”Asked when the decision was taken, the spokesman said: “Following the decision on Plan B and the latest data we’ve got.”

Mr Cummings also denied claims he was the source of the leaked video that showed adviser Allegra Stratton, who has since resigned, joking about a festive party. Asked if he obtained the clip and shared it with ITV News, Mr Cummings said: “No.”

Asked how and when theTories may replace Mr Johnson, he said: “The polls will lead it, plus his inevitable continued flat spin, plus officials kicking him off the ice, plus rivals…intervening. He’s done, gone by this time next year, probably summer.”

Asked about the next PM, he said: “[Liz] Truss and [Sajid] Javid are not solutions”. And of his former Brexit ally Michael Gove he said: “No.”