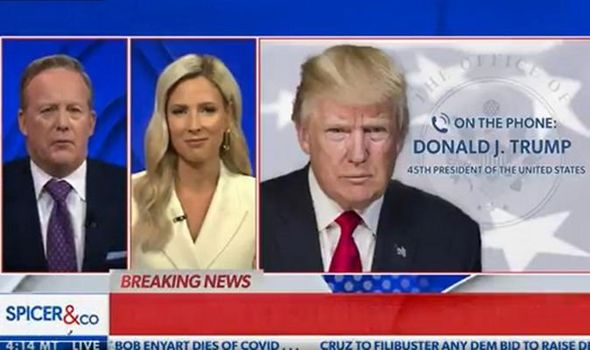 Donald Trump predicted the end of America during a scathing Newsmax interview with his former White House press secretary, Sean Spicer. Speaking yesterday, Mr Trump made several explosive claims about Joe Biden’s “disastrous” presidency and said “he is worse than Obama” but went on to assert that “Obama is probably running the government now anyway”.

He said: “Our country has gone really downhill in the last eight months, like nobody has ever seen before.

Mr Spicer then promptly tried to end the interview- possibly because Newsmax is facing a $1.6m lawsuit from Dominion Voting Systems for allegedly spreading election misinformation- but he couldn’t let the former president go before asking him whether he will run for president in 2024.

Mr Trump skirted around the question at first, but then hinted: “I think you will be very happy Sean, and a lot of people who love our country are going to be very happy.”

He rambled on to say America is a “laughing stock” and a “disgrace”, blasting President Biden’s handling of Afghanistan and claiming the president has allowed “millions of people” to come through the country’s borders, of whom “we have no idea who they are”.

Viewers swiftly shared their thoughts on Twitter, with many thinking Mr Trump shot himself in the foot with his contradictory claims.

One user said: “Lol Trump was in the White House eight months ago, so he just trashed himself.”

And a third said: “How do you campaign, and ask people to come out and vote, at the same time that you tell them that as president you couldn’t protect their vote and had the election stolen from you?”