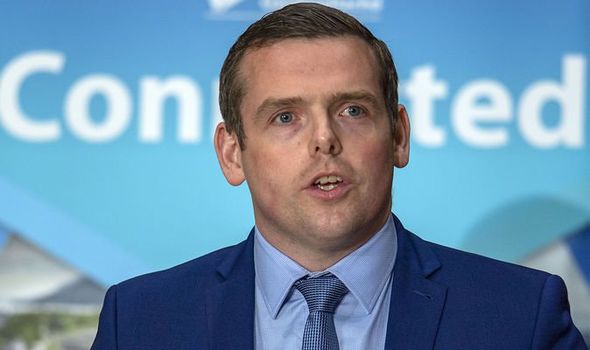 The Scottish Tory leader will introduce legislation to give constituents the power to recall their representative if they are not deemed to be properly representing their area.

Dubbed as “Mackay’s law”, the legislation takes its name from SNP MSP Derek Mackay who resigned as a minister after it emerged he had been messaging a 16-year-old boy.

Once he stood down from the government, he continued to receive his MSP salary despite rarely being seen in the Holyrood parliament.

“In no other job could someone forfeit a six-figure sum while hiding at home, so why would we stand for it in the Scottish Parliament?” He said.

Mr Ross said it was time to give constituents the right to have a greater say on who represents them in-between elections.

The Tory leader said the SNP was failing to stand up to the needs of the “working people” of Scotland as he pledged to remove Nicola Sturgeon from power.

“Let’s never forget, no matter how often or how loudly the SNP go on about it, independence is a minority pursuit in Scotland,” he told delegates.

“Working Scotland has bigger and far more pressing concerns than the minority’s endless agitation for a referendum re-run.”

After the Conservatives received their biggest ever vote share at a Holyrood election in May, the Scottish Tory leader told delegates at the Conservative party conference in Manchester it the party needed to focus on stopping attempts for a new independence referendum.

He said: “While we can take little time today to celebrate the election, we must also prepare ourselves for the task ahead.

“It’s not good enough to stop an SNP majority, we have to stop nationalism for good.

“It’s a big challenge, it will take a party that knows, listens to, and represents working Scotland.”

He added: “We are going forward and the next wall to fall, it won’t be red this time, it will be SNP yellow.

“And marred by other failings her government is far too distracted to handle.”