Belgian Pascal Arimont, the EU Parliament’s negotiator on the Brexit Adjustment Reserve, said the fund was insufficient to fully support industries and regions hit by the UK’s divorce and will have to be topped up by member states. Under the scheme, cash from the EU’s budget will be handed to capitals to distribute to help mitigate the impact of Brexit. Ireland, France, Germany and the Netherlands are expecting to receive the biggest windfalls from the pot.

Mr Arimont told a news conference today: “Obviously, the money won’t be enough to deal with the economic shock caused by Brexit.”

Citing recent figures that show a 23 percent slump in the trade in goods between the UK and EU, he added: “I think that shows that this is an economic catastrophe.

“This fund will try to mitigate things but we’ve said right from the start that we can’t deal with the whole problem through this. This is only a part of the solution.

“This five billion, obviously we’ll need more money, but in each member state they can give more money than what’s here.” 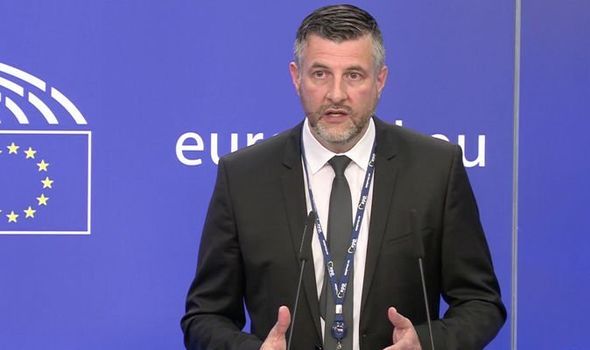 After protests from French President Emmanuel Macron, he is set to trouser almost £580 million under the Parliament’s proposal – almost £250 million more than previously suggested by the European Commission’s initial plans.

Mr Macron had lobbied his MEPs to push for changes to the methods used to allocate money from the fund.

Of the Parisian efforts to drive through changes to the scheme, Mr Arimont said: “France is the country that will be getting most money in the new allocation methods.

“Obviously there were requests from colleagues, also in Council, that France get more. But I think what we’ve come to here is a balanced compromise between those that are most affected.

“France obviously is affected, that’s not in question – they’re getting the third-highest amount from this adjustment reserve.”

Negotiations will not begin between the Parliament, Council and Commission to come to a final agreement on the proposal.

They are hoping cash will be ready for distribution after July once a deal is reached between the EU’s institutions.

Last week the Portuguese foreign minister Augusto Santos Silva said that “the reserve aims to support all member states to combat the negative consequences of the UK’s exit”.

The EU’s fisheries industry is expected to be one of the most blighted trades by Brexit.

Eurovision result ‘probably to do with Brexit’ says Matthew Wright

Under the terms of the future relationship pact, Brussels handed back 25 percent of the fish it catches by value in British waters over a five-and-half-year transition period.

France has already furiously claimed that its trawlermen have been locked out of our coastal waters as a result of the Brexit trade deal.

Paris has promised to use its cut of the Brexit Adjustment Reserve to help its coastal communities get over the divorce.