European Commission President Ursula von der Leyen is preparing to use unprecedented emergency powers to seize control of factories and shipments to the UK in order to boost the bloc’s stash of immunisations. The top eurocrat singled out Britain, declaring she would block Pfizer from sending doses to our shores unless UK-made AstraZeneca are shipped to the Continent. Mrs von der Leyen fumed: “All options are on the table. We are in the crisis of the centre and I’m not ruling out anything for now because we have to make sure Europeans are vaccinated as soon as possible.”

The German insisted she would use the powers to grab Europe’s “fair share” of Covid jabs because the bloc’s mass vaccination programme is lagging behind Britain.

She is furious that European countries have suffered a shortfall in deliveries from UK-based pharmaceutical giant AstraZeneca.

“We want to see reciprocity and proportionality in exports, and we are ready to use whatever tool you need to deliver on that,” Mrs von der Leyen said. 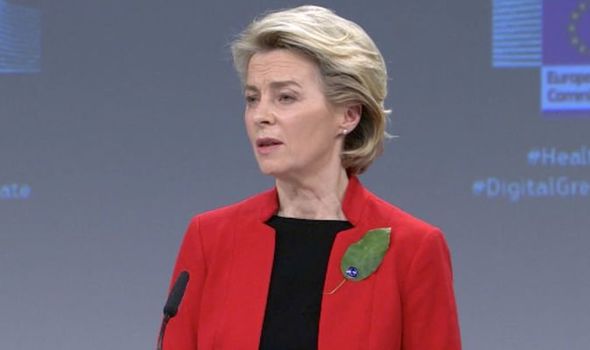 “We want to see reciprocity and proportionality in exports, and we are ready to use whatever tool you need to deliver on that.

“We will have to reflect on how to make exports to vaccine producing countries. We are exporting to countries that are themselves producing vaccines, and this is this is an invitation to be open so that you also see experts from those countries coming to Europe.”

The quasi-war time EU powers have not been triggered since the 1970s when Europe was in the midst of an oil crisis.

Article 122 of the bloc’s treaties allows the Commission to seize control of factories, rip up patents and block exports.