Hours after Florida installed a rash of new voting restrictions, the Republican-led Legislature in Texas pressed ahead on Thursday with its own far-reaching bill that would make it one of the most difficult states in the nation in which to cast a ballot.

The Texas bill would, among other restrictions, greatly empower partisan poll watchers, prohibit election officials from mailing out absentee ballot applications and impose strict punishments for those who provide assistance outside the lines of what is permissible. The State House of Representatives was scheduled to debate the measure late into the evening with the possibility that it would pass it and send it to the Senate.

Gov. Greg Abbott is widely expected to sign the bill into law.

Briscoe Cain, the Republican sponsor of the bill, said he had filed it “to ensure that we have an equal and uniform application of our election code and to protect people from being taken advantage of.”

He was quickly challenged by Jessica González, a Democratic representative and vice chair of the House Election Committee, who argued that the bill was a solution in search of problem. She cited testimony in which the Texas secretary of state said that the 2020 election had been found to be “free, fair and secure.”

Florida and Texas are critical Republican-led battleground states with booming populations and 70 Electoral College votes between them. The new measures the legislatures are putting in place represent the apex of the current Republican effort to roll back access to voting across the country following the loss of the White House amid historic turnout in the 2020 election.

Earlier on Thursday, Gov. Ron DeSantis of Florida, with great fanfare, signed his state’s new voting bill, which passed last week. Held at a Palm Beach hotel with cheering supporters in the background, the ceremony showcased Mr. DeSantis’s brash style; the governor’s office barred most journalists and provided exclusive access to Fox News, a nose-thumbing gesture of contempt toward a news media he viewed as overly critical of the bill.

“Right now, I have what we think is the strongest election integrity measures in the country,” Mr. DeSantis said, though he has praised Florida’s handling of last November’s elections.

Ohio, another state under complete Republican control, introduced a new omnibus voting bill on Thursday that would further limit drop boxes in the state, limit ballot collection processes and reduce early in-person voting by one day, while also making improvements to access such as an online absentee ballot request portal and automatic registration at motor vehicle offices.

Iowa and Georgia have already passed bills that not only impose new restrictions but grant those states’ legislatures greater control over the electoral process.

Republicans have pressed forward with these bills over the protests of countless Democrats, civil rights groups, faith leaders, voting rights groups and multinational corporations, displaying an increasing no-apologies aggressiveness in rolling back access to voting.

The efforts come as Republicans in Washington are seeking to oust Representative Liz Cheney from her leadership position in the House Republican caucus for her continued rejection of former President Donald J. Trump’s lies about the 2020 election, and as Republicans at a party convention in Utah booed Senator Mitt Romney for his criticism of the former president.

Together, the Republican actions reflect how deeply the party has embraced the so-called Big Lie espoused by Mr. Trump through his claims that the 2020 election was stolen. 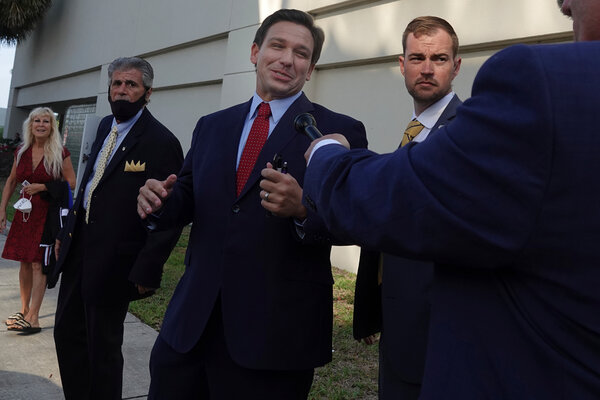 In Georgia and Texas, progressive groups applied pressure on local businesses to speak out against the voting measures. But Republican legislators have been conditioned during the Trump era to pay less attention to their traditional benefactors in chambers of commerce and more attention to the party’s grass roots, who are aligned with the former president and adhere to his lies about the 2020 election.

And in Florida, Democrats didn’t even manage to organize major local companies to weigh in on the voting law.

“Elections have consequences both ways, and we are living in the consequences of the Trumpiest governor in America here in Florida,” said Sean Shaw, a former state representative who was the 2018 Democratic nominee for Florida attorney general. “The ultimate strategy is, what are we going to do in 2022? How are we going to beat the dude?”

Mr. Shaw, who offered an extended laugh when first asked what his party’s strategy was for combating Florida’s new voting law, said he was planning to start a campaign this month to place referendums on the state’s 2022 ballots for constitutional amendments that would make voting easier.

“We are not Mississippi or Alabama,” he said. “We are not that kind of conservative state, but we are governed by this mini-Trump person. All we can do as Democrats is let the people know what they’ve got.”

Marc Elias, a Democratic lawyer, filed a lawsuit nine minutes after Mr. DeSantis had signed the legislation, saying that the new Florida law violated the First and 14th amendments to the U.S. Constitution.

“It’s not true that states could not change their voting laws whenever they want,” Mr. Elias said in an interview Thursday. “You have to weigh the burden on the voter with the interest of the state.”

The Battle Over Voting Rights

Amid months of false claims by former President Donald J. Trump that the 2020 election was stolen from him, Republican lawmakers in many states are marching ahead to pass laws making it harder to vote and changing how elections are run, frustrating Democrats and even some election officials in their own party.