WASHINGTON — In the final years of the Cold War, Secretary of State George P. Shultz negotiated the first arms-control treaty in history to eliminate an entire class of nuclear weapons, a crowning achievement of President Ronald Reagan’s tenure and the start of a new era of nuclear de-escalation.

So when President Trump pulled the United States out of the Intermediate-Range Nuclear Forces Treaty with Russia last year, Mr. Shultz saw it as a dangerous step backward, away from the Reagan-era policies that were meant to bring the major nuclear powers closer together and make the world safer for generations to come.

“Withdrawing from the I.N.F. treaty was a giant mistake,” Mr. Shultz said in a telephone interview on Friday. “You lose not only the agreement itself, but you lose all those verification provisions that we worked so hard on.”

As he publishes a new book on Sunday in advance of his 100th birthday in December, Mr. Shultz has become America’s uber elder statesman, the longest-serving secretary of state of the last half-century and a voice ever since for the kind of international engagement and political moderation that have seemingly fallen out of favor. At a moment when the United States has pulled back from its allies, Mr. Shultz is speaking out for a renewal of American leadership overseas.

In “A Hinge of History,” written with James Timbie, a longtime State Department adviser who helped negotiate the I.N.F. treaty, Mr. Shultz argues that the world is now at a pivot point in history much like the one it faced at the end of World War II. Based on research at Stanford University’s Hoover Institution, where he is a fellow, Mr. Shultz describes what he sees as necessary changes in education, migration, national security, technology, economics and democratization, all of which he says will require international cooperation of the sort rarely seen these days.

“We seem to be in an upset state of affairs where it’s hard to get things accomplished,” he observed in the interview. He especially lamented the Trump administration’s allergy to international accords. “They seem to be skeptical of these agreements, of any agreement. Agreements aren’t usually perfect. You don’t get everything you want. You compromise a little bit. But they’re way better than nothing.”

He likewise criticized Mr. Trump’s combative approach to the rest of the world in a new article in The Foreign Service Journal. “After nearly four years of an administration that seems to have assumed that American relations with the rest of the world is a zero-sum game and that the game is based largely on the personal relations between national leaders, distrust abounds internationally,” he wrote. 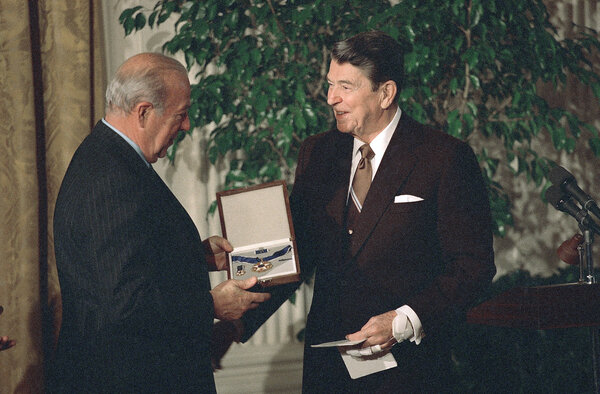 While no longer a household name, Mr. Shultz was once one of the premier figures of his generation in Washington. A versatile public servant, he led three cabinet departments, serving as secretary of labor and later as secretary of the Treasury under President Richard M. Nixon before becoming Reagan’s secretary of state from 1982 to 1989. Under Nixon, he was also the director of the White House Office of Management and Budget, a key position in any administration.

Despite his lifetime of Republican credentials, Mr. Shultz refused to publicly endorse Mr. Trump in 2016 or this year but did not back his Democratic opponents either. Like Condoleezza Rice, another former Republican secretary of state who now runs the Hoover Institution, Mr. Shultz declined to disclose for whom he would vote in Tuesday’s election, but he left little doubt about his dim regard for Mr. Trump.

Asked for his assessment of the incumbent president, the first thing Mr. Shultz volunteered was his respect and admiration for former Defense Secretary Jim Mattis, who resigned in protest after Mr. Trump decided to pull troops out of northern Syria and leave America’s Kurdish allies on their own.

“I say, if you can’t hold a guy like Jim Mattis …,” Mr. Shultz said without finishing the thought. He then described a conversation with Mr. Mattis, who is also now at Hoover. “I said, ‘What’d you leave for, Jim?’ He said, ‘Well, the president makes a decision about Syria and doesn’t even ask my opinion.’ It’s a big loss. You’ve got to keep people like that.”

By contrast, Mr. Shultz offered no criticism of former Vice President Joseph R. Biden Jr., the Democratic nominee, with whom he worked when he was secretary of state and Mr. Biden was a member of the Senate Foreign Relations Committee. Mr. Shultz remembered that in those days, he could disagree with Democrats without sacrificing mutual respect and friendship.

“He’s that kind of guy,” he said of Mr. Biden. “You can have a big argument, but that doesn’t mean you can’t be friends.” He said he had recently teased Mr. Biden, who is 77, that “from my standpoint, you’re a promising young man.”

Mr. Shultz agrees with Mr. Trump on some issues. He approved of the president’s decision to withdraw from President Barack Obama’s nuclear accord with Iran, which he found flawed, and he praised the recent deals establishing diplomatic recognition between Israel and several Arab neighbors, calling those moves “brilliant.” He likewise endorsed Mr. Trump’s early travel restrictions to stem the flow of the coronavirus.

But Mr. Shultz said it was important to take the virus seriously, noting that he and Charlotte, his wife, stay inside their home on the Stanford campus except for taking walks when the weather is nice. And he said he hoped Mr. Trump would renew the New START nuclear arms treaty with Russia and take on climate change, a subject that he has worked on extensively in recent years as he promotes a carbon tax.

Mr. Shultz is also a defender of the career diplomats that Mr. Trump deems part of a “deep state” that is out to get him. Perhaps more than any modern secretary of state, Mr. Shultz was seen as a champion of the professionals at the State Department, for which he is still remembered reverentially by veteran diplomats.

In the Foreign Service Journal article, Mr. Shultz hailed Marie L. Yovanovitch, the ambassador to Ukraine who was smeared by Mr. Trump and his allies last year, and called for a renewal of the diplomatic corps.

“He doesn’t trust any of the government people; that’s not correct,” Mr. Shultz said of Mr. Trump in the interview. “I found the Foreign Service was terrific. They were knowledgeable people, and they would work hard for you if you worked hard for them.”